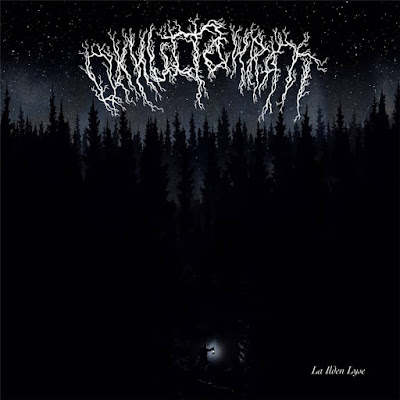 This band from Norway has bounced back and forth from being punk to black metal throughout their career. This results in varied levels of black n roll or blackened punk. Does this make you think of Kvelertak? The difference here is more apparent on this album as these guys summon a sound that is  darker. It is also denser. This gives it more of a metal feel. This metal feel gets more of a rumble on the second song. While the rasp of the lead screamer is very feral, the lyrics do not cut through , judging from the song titles they are more than likely some kind of hodge podge occult references from people who get all of their knowledge from the lyrics of other metal songs. I can appreciate the icy mean teeth of "Loathe Forever" , but this is also when things begin to run together for me . I might just have to go back into this album with head phones in order to pick up whatever details I am missing here. At present it sounds like the wailing and gnashing of teeth accompanied by distortion. Though cranking it a little without head phones does help.

There is a more deliberate rock accent to "Freezing Vortex Death Dreamer". Think a black metal version of  AC/DC's "TNT". The rasp is not sung but easier to make out what it is trying to accomplish in terms of song structure. "Cold & Cruel" sets itself apart by being very straight forward and punk. Not my favorite of the album as it's too straight forward. The drumming is pretty boring. They throw in some interesting sounds that go beyond punk, but it's a sound not a song. There is like a new wave Motorhead feel to " Kiss of Death". The bass tone is pretty burly. The drums are better than the previous song , but not groove to them. "Mother Superior" is darker and more interesting . The vocals occupy a similar scowling place they have for the bulk of the album. The layered chaos here has more form and function. The snarling charge of "Lunatics" works better than the feral fuzz the album was in as it is more song minded .

"The Dying Grass Moon" works of one simple throb, but it is done in a more interesting manner than some of their more simplified concepts on this album. They layer it in a way that almost gives it more dynamic range. I will round this one down to an 8 as they have some interesting sounds that set them apart for you average black n roll band, but the songs are all pretty much what you hear is what you get with few surprises once they pull you into their pulsation. This album comes out on May 15th on Southern Lord.