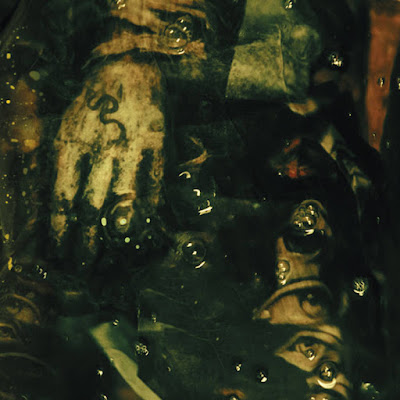 This band from Finland continues to grow weirder and more outside of the bounds of that black metal is supposed to be . The first songs finds the vocals sounding like when King Diamond is doing the voices for the demons at the beginning of "Them" . They do drone on this angular bass groove, they do it in a manner not like that of other black metal bands where they hold a static tremolo picked riff and just hang on the atmosphere it creates. The Moog like synth sounds are layered to create a build. I am using the words black metal, but this is just a point of reference as they are just as easily called a psychedelic metal band. Really the vocals were they only thing metal about the first song and the second song coasts on some space vibes that have more in common with Radiohead than Darkthrone. Once again it's the gurgled vocals that are the prevailing metal element. That is until the three and a half minute mark when a sonic storm begins to brew. This is broken up by clanging garage rock guitar before the aliens begin to possess their instruments. This is the only explanation for what happens.

They pick up the pace into cruise control through the cosmos. I think flutes might be involved, by this point the drugs have really kicked in for them so it's hard to tell what is going on until they approach the three minute mark of the third song and it sounds like King Crimson writing a theme song for bumper cars in Hell. They do allow for an ebb and flow of dynamics, so by this point they have proven drone is not their only mode of jamming. The song disappears into thin are eight minutes in. This is not the first instance where I have heard opportunity for them to trim the fat here and there and make a ten minute song an eight minute song. To their credit for what they are doing they could have turned these songs into more of a sprawl. This is the band's fifth full length so they are well aware of what they are doing and how they want to do it.

It is not until the fourth song that things begin to get heavy in a metallic sense, though even then it is executed in a way where the sonic intensity of how they throw themselves into the building dynamic is what adds to it. The vocals take on the most overt black metal snarl. The song after this one is still aggressive but in an industrial manner rather than metal. The last song comes closer to black metal in the feral chaos invoked , though like the rest of this album it is not achieved in the conventional manner, more like something Liturgy would do. Not easily defined the sense of originality here goes along way even when in terms of song writing te work off feel rather than composition. I will give this one a 9.