the Psychedelic Furs : " Made of Rain" 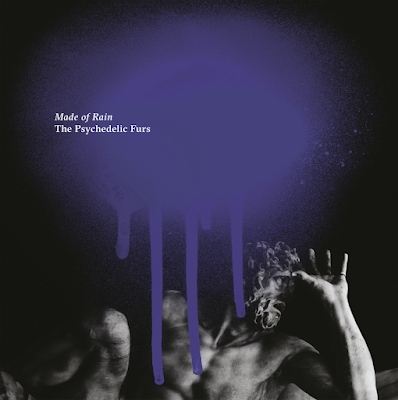 Of all the bands who crept from this dark corner of the 80s the Furs were neglected by me . I always enjoyed what I heard from them and had a couple of cds , but never gave them the time I devoted to bands like the Cure or Joy Division. I do not think it was unfounded for me to think of them more on the commercial side of this. They certainly got more radio time than say Bauhaus and I would not be as quick to call them goth as I would Siouxsie or the Cure. I am pretty blown away but what I am hearing here. Richard Butler sounds great. There is way more emotion in songs like "Wrong Train" than I normally associate with them. The first two songs have swirling sonic layers that remind me of Bowie's "Outside" album, if you replaced the industrial elements with shoe gaze.

The morose heart ache of "This Will Never Be Like Love"is wonderfully glum. The drums to the more up-tempo "Ash Wednesday"  are very nuanced allowing for the vocals to coast with their haunting phrasing. There is a slight sardonic sneer to "Don't Believe" which has more drive than the previous songs. The lyrics are more pointed and sung with marginally more grit, I normally listen to metal when I am not listening to mopey 80s music , so to call it aggressive would be an overstatement, considering how high the bar is raised for aggression here. . Overall the lyrics are one of this album's strong suits. "Come All Ye Faithful" does what the previous song did better as it has more of a slinky groove and more bounce to the bass line. The dancey feel continues on "No One" which is the lead single off this album it, feels like it came from the 90s. "Tiny Hands" doesn't hold up as well against the other songs. It's more of a ballad and just less compelling.

They are back to what they do the best with "Hide the Medicine". Not is not as moody as the first half of the album, but still well written. The melodies are set perfectly against the more atmospheric guitar coloring "Turn Your Back". When they catch you up in the enthralling splendor of sound they summon the band is at their best. The more ballad like moments might still grow on me so I will round this up to a 10, since even those moments they are doing what they set out to it's just my tastes have to catch up to that.

Email ThisBlogThis!Share to TwitterShare to FacebookShare to Pinterest
Labels: " Made of Rain", 10, album review, new wave, the Psychedelic Furs