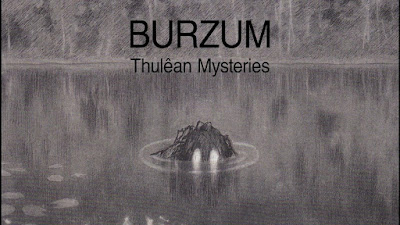 Varg has no wish to make metal. He would see that as selling out. I understand the sentiment and respect he upholds  his convictions. I do not have to agree with some one in order to respect the fact they are 100 percent congruent with what they believe , I went into this album expecting just ambiance. So I was surprised that the song " Forebears " has actual guitar . It is not the buzz of black metal tremolo, but it is guitar.  I am sure an entire album of this is going to bore me. This is not something I need to have on my iPod. There are some of the more folk instruments on the album, but you might be surprised how conventional some of this is. "a Thulean Perspective" has piano. Not one that has been tuned in some time, but piano.

There is more of a folk feel to "Gathering Herbs". I think smoking pot might do Varg some good. However .  "Heil Auk.." is the first song to have vocals. In this case the are just a chant.  23 songs on this album and many of them are just over a minute. I think some could have been combined into one song here and there, This whole thing could have been wrapped up in ten songs.  Titles like "the Ettin Stone hear" make me think of  Dungeons & Dragons .  There is a sung vocal on "the Great Sleep" The song is only a minute and a half , but most of these are short ditties. There is a cosmic fairy keyboard ditty called 'the Land of Thule" next. It doesn't really go anywhere and he just does spoken word over it.  "the Lord of the Dwarves" is the first thing that sounds like it could be remotely metal as there are some harsher sound being made with what sounded to be distorted guitar.

"a Forgotten Real" is at least consistent with the them of this album, synth pads for him to talk over.It does drone on for seven and a half minutes which can be tiresome. "Heil Odin, Sire" is a minimalist folk ditty that he sings on. It's ok for what it is There is more distortion on " the Road to Hel" I wish he would work something like this into more of a song. I would settle for less metal than "Fallen". Instead we get the same three notes droned on for almost eight minutes. With 23 tracks there are more ambient passages with whispering than there are songs, so I am not going to rattle off the entire selection of ambient pieces. If you want to discuss those go listen to the album on your own. Some have more sounds of dripping water than others. "Skin Traveller" sounds like the beginning of a Pink Floyd song that you are waiting to kick in.  I will however at the end of the day round this down to a 7. For what it is , this album sounds good. I just don't like what it is. I am ok with Varg not doing metal, but wish he made this more along the lines of Wardruna or Death in June.