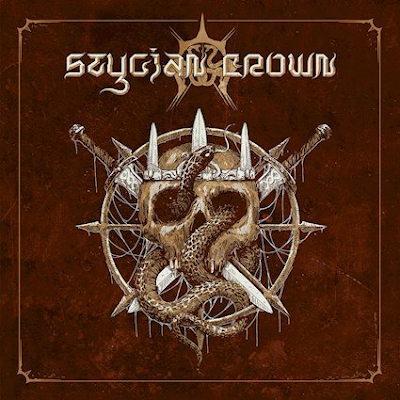 The thing that gets me about singer's supposedly being classically trained is it really means they know how to correctly sing  It can range from being a Julliard grad to having a voice teach who was an opera singer. I suspect the later here. The catch with this is sometimes they can get hung up on what they learned and forget if rock n roll is about breaking the rules , then metal should be about selling those rules to the devil. Technique can drain the soul from singing if you get carried away with it .It is not until the third song that I hear soul slip through the vibrato of Melissa Pinion who sings for this California based band . On paper this should feel more like Candlemass , but instead feels more like power metal in places. There are touches where it does work off the Candlemass vibe like on "Up From the Depths" . The female vocals kinda of throw you off the trail a little, though these guys readily admit Candlemass and Bolt Thrower are their two biggest influences. The clean vocals do keep them from sounding like every other death doom band as I can hear where growls would go.

When the pace picks up into more of a gallop that would normally be death metal is where the power metal tendencies come in. The guitars ae not as happy as power metal, there are no Maiden like guitar harmonies and when the guitar modulates to get heavier the mood is more intense."Flametongue" finds the band defaulting to use the run of the mill heavy metal tropes with perhaps a little more beef behind them. It falls more solidly into power metal than what I normally listen to. The darker shift on "When Old Gods Die" is just what they needed. The effects on her voice is something that needs to happen more as it loosens up her somewhat stiff bellow. Then we are back to the normally expect metal with "Trampled Into the Earth" . It falls flat for me here as the death metal aggression is dialed back until mid way into the song leaving this just to be power metal. I begin to feel like I was tricked into reviewing a power metal album.


The last song comes in strong. It is more conventional metal but has groove to it. How ever this is a case in point to the rule hear that cool riffs alone does not a good song make. They have a cool riff they could worked off of but instead take a turn. The guitar solo here is actually pretty cool and I am not normally into that sort of thing. I will however give this album an 8. If you are into power metal it's a heavier take on that. They are good at what they do and give something a different spin here. They have a great deal of potential , would like to hear them experiment more next time around.