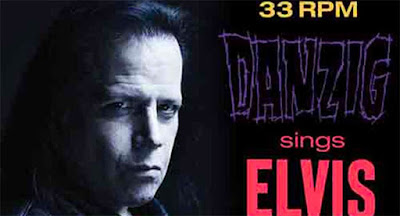 On paper this sounds pretty fool proof as his persona has been the evil Elvis for years. Perhaps this album should have come earlier in his career. What I feared going into this was that much like his previous album, his voice would be weak. Since I am so familiar with these songs it makes every strained noted he just can not hit even more apparent.

" But he is 64 !" you say in his defense. First off you do not have to defend Danzig with me. I was already a fan, but his best years might now be almost a decade past us. Age doesn't fly with me as an excuse. I just reviewed the new Psychedelic Furs album and Richard Butler sounds just fine and he is only one year younger. Granted Butler is not trying to tackle Elvis. The second part of the problem is it almost sounds like karaoke as Danzig is not cranking up the kind of gritty AC/DC like guitar tones we heard back on "Lucifuge" . It's minimal reverb drenched rock a billy. The drums patter so softly they are almost not there. He must have enlisted a band of 70 year old's to back him as they are taking a nap during this session. I think you could go into any honky tonk and find the cover band playing these songs better. When it opens with "Is it So Strange" I thought , he is not able to belt this out, but perhaps his is loving this song tender. He hit the first few notes of "One Night With You" .  But the phrase " just call my name.." could have used more of a growl to it. "Been too lonely too long " is flat which is crucial to the song's swagger. This could have used more guitars as if they have been rocking out his voice could have sat back into the mix and not have been so glaring. Then things go down hill for the next two songs "Lonely Blue Boy" being the better of the two. The second time I listened to it did not make me wince as bad. "First In Line" is where his struggle become real. The kicker is this is not a live recording where he was tired from touring and winded, These are the best takes of what he could do. How bad are the worst takes ?

"Baby Let's Play House" is the best of the bunch so far. He pulls this one off. "Love Me" is one of the King's more emotive moments. I am ok with hearing effects on Danzig's voice to soften the blow .The problem is just not the higher notes, you lose him on the lower ones as his range now has shrunken to his mid range. It's not like we are asking him to sing Led Zeppelin. I could understand how that might be problematic, but how can he not sing Elvis flawlessly in the studio? I pretty much seals the deal that I will hang onto the half dozen times I have already seen him and not bother trying to catch him when bands begin playing live again. He does better with "Pocket Full of  Rainbows" but it makes me think perhaps he should have tried a Bing Crosby cover album instead. If we can not agree he was born to sing "Fever" . After all that is the song the King added some grit to . He doesn't flub it but I would say he knocks it out of the park like he should. "When It Rains It Really Pours" might have worked if the guitar did not have a shitty tinny tone.

"Always On My Mind" is not actually an Elvis. Yes, he sang it but it was originally recorded my BJ Thomas, so it no more belongs to Elvis than it does Willie Nelson or the Pet Shop Boys. Did CC Deville step in to play the solo on this one? Anyway Danzig does pretty well with it. "Loving Arms" is alright, but do I think Chris Isaak would do it better ? Yes. I can live with this version so that album begins to improve in the second half. "Like a Baby" is a silly song when you listen to the lyrics. It makes Danzig sound like he wan't to be a little. He does hit all the notes, perhaps not with the kind of power I want from him, but I can live with it. The guitar comes up some for "Girl of My Best Friend" . It's a good song and he doesn't mistreat it, so we are getting somewhere. His voice does sound like it's a little tired making me think at some point perhaps the Misfits shows he blew his voice out and that is what we have to work with. "Young and Beautiful" is a fast forward classic when it comes to Elvis songs. To Glen's credit he did not pick the hits and dug up some deep cuts and b-sides. I will round this down to a 7, it's listenable unless you are as much of an Elvis fan as you are a Danzig fan. I am ok with this not being a metal album, but the production here did not do him any favors. I know curiosity is going to make you listen to this, I hope I broke the bad news for you so now you can go into this with better expectations than I had.