Trivium : "What the Dead Men Say" 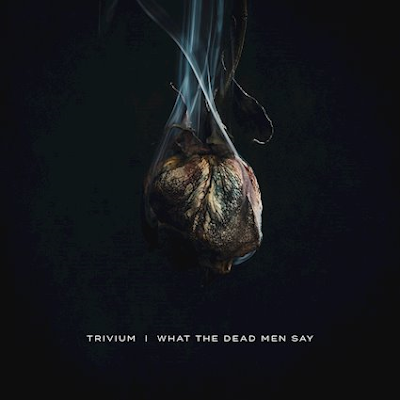 I heard there first album and have caught a song here and there since, but have not paid much attention to them since. I remember they were trash and now they have conformed to what the current trend of  modern metal is a little Slipknot, a dash of Killswitch Engage and then produced the guitar tone like Gojira. Heafy's vocals have improved over the years. He is supposed to be a really good guitarists and the first song doesn't really wow me. I think if the whole album is like this it will bore me. I am ok with Slipknot, I liked their last album as they were fucking with their formula and experimenting .  I am not ok with Heafy trying to sound so much like Corey Taylor. Corey Taylor's voice by itself would be boring , but it works in the context of Slipknot. This just sounds like middle of the road metal that everyone else plays who wants to get an opening slot playing Slipknot or an equally mall metal band. Metal needs to have a sense of danger and darkness as this just feels like eating left overs .

As a song "Bleed into Me" is a little better. But if you can not hear the Corey Taylor, you are an idiot who doesn't want to hear it. Wait you cry...you can't call me an idiot. Oh, yes I can this is my fucking blog and if you don't like click somewhere else. Now I get this could be the record label and producer trying to nudge them into a more Slipknot direction . Though that makes them sell outs for agreeing with that in the first place. They do get away from this and more into the kinda Myspace thrash that Killswitch Engage plays. Heafy sings more than he yells or darks these days. The drums sound like shit on this song. The mix is all fucking guitar and the bass has no balls. I just made the 50 heaviest albums of all time list, so go find it on here, if you want to hear what real metal that is not made by pussies sounds like. I think we know I am not the right audience for these guys. I think when I was in the I Do Not Know Better Because I am 13 mode, I made better choices. King Diamond, Iron Maiden and even W.A.S.P are way more metal than these guys. Yes they have a big galloping sound, too bad they do not put it to better use.

There is a kinda power metal riff before they go Breaking Benjamin on "Scattering the Ashes" . This one at least makes more of an effort from a songwriting perspective , which proves they can write a decent song if they set their mind to it. It's the least heavy song, but every thing fits and is hooky.The rest sounds like filler in comparison. The guitar playing still isn't impressing me. It could be one of a thousand generic metal guitarists. Back to boring with "Bending the Arc to Fear" . Nothing original. The last song "the Ones We Leave  Behind" doesn't do anything to change my opinion of the band, which is this is how Myspace Metal sells out. I will round this down to a 6. The one song that saves the album from being a 5 is "Scattering the Ashes" which in hindsight if someone asked me how I like this album, I would say "It has one good song on it" .