An Autumn For Crippled : " All Fell Silent, Everything Went Quiet " 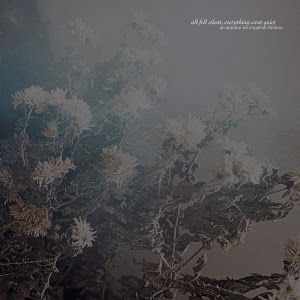 Long time readers will know I have been a pretty big supporter of this band since the beginning. Even as they grew away from black metal. They have still stayed true to creating an anonymous shroud of secrecy around them and have yet to play live. This marks the band's first album for Prosthetic Records. I would not say they are fully embracing their black metal past on the first song, but it is one of the more aggressive moments we have heard from them as of late. This is one band who you can not say are jumping on the black gaze Deafheaven band wagon, if anything along with Weakling these guys might have influenced Deafheaven. The second song finds them relenting in more of a up tempo shoe gazing thing. They experiment with some new tones and are defiantly moving away from the more post-rock direction and into a more driven sound. Two songs in and I am pleased can they keep the momentum.

The answer comes in the third song . Not exactly. If it wasn't for the screamed vocals it could be indie rock. Think Hum here. "Paths" find the vocals which sit pretty far back into the guitars, cutting through more. The synths also come forward in the mix more. The sonic density goes along way with me and balances out the fact that this album is not as dark as their earlier work. They used to be more  of a depressive black metal band. "Silver' keeps the pace up while using melodic layers of atmosphere to juxtapose it. Symphonic synths create a odd break down where the bass still rumbles. "None More Pale" moves at a more post-punk pace. Flowing tension, but very melodic. The song stays in motion. This creates the illusion of a black metal band when they are not playing black metal, which is a feat to be applauded in and of itself.

The title track goes a little more melancholy at first then falls in line with what they have been doing for the rest of the album. The album begins to fall into the kinda of sonic blur that many black metal bands do. "Craving Silence" makes a solid argument that these guys have returned to black metal. I think in attitude they have. The last song doesn't do much to set itself apart from the rest of the album. I will give this a 9 for showing more teeth than they have in some time and finding their way back to a place that at least leads towards black metal. This album comes out May 1st.