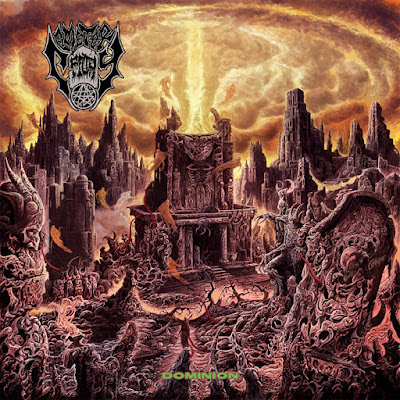 Their Bandcamp page claims this is how death metal is supposed to be. Let's see if their debut album lives up to the claim. Very thrash influenced death with deep Morbid Angel like vocals. The opening track starts off with a little more color to set themselves apart once things really kick in then we are back to what thousands of other bands are doing. My goal over the course of this review is to see what sets them apart from all the other Morbid Angel impersonators. This band consists of four members who come from various states in the southeast, including Florida which was once a hot bed of death metal. The riffs are perhaps a little more technical than "Altars of Madness" yet not the steam rolling machine of "Formulas Fatal to the Flesh". The vocals take on more of a snarl on the second. The south has been pumping out some great death metal Pulchra Morte and Withered come to mind. Both of those bands have more memorable riffs. The guitar tone on the solo to "Exhumed Visions" is the best on the album yet, so production value is uneven. The bass could have more grit in it's tone and the drums could be more in your face. Instead we get a tormenting maze of guitar.

Having been around for the explosion of death metal out of  Tampa and even seen Morbid Angel on the "Blessed Are the Sick" tour I have been here done this and got the t-shirt so I am going to be more impressed by the more Slayer like chug of "Paralytic Scourge" that an entire chapel of ghoulish riffs. While I am tired of the recent deluge of death doom, I do think when these guys slow down things sound better. They do switch it up and step away from the lord of all fevers and plagues to get a little more Deicide on "Aeons in Dis". There are some riffs with more hook to them. The Deicide comparison actually comes from how the vocals are accented. They help make this the best song so far. They are not trying to throw in more notes than needed. Are they reinventing the death metal here ? Not by a long shot. Giving up their desolate ways to forge a new sound is not happening. I think at best they could shake their influences more. Their is nothing wrong with pulling from the classics I will take that over Whitechapel any day.

For every Mamaleek, there is going to be a band like this. That is what makes the truly original bands stand out. The problem is while this is not a day of suffering, by the time we get to "Churning of the Shadows" I am beginning to get bored. There were ten promos for death metal releases most from different labels before I finished my first cup of coffee. I rarely listen to any two death metal albums back to back since the genre can default to a singular minded monochrome aggression. There is a clean guitar interlude before the last song and I wish they had instead incorporated it into one of the actual songs as they need more sonic colors. The title track closes the album, while the three songs before this one ran together this song marginally sets itself apart . They pick up the speed for the verses. Some slime might live on the riffs that breaks this up a little, they need more of that . I will give this album a 7.5 , due to the ruts I have already stated that it falls into. Still they have a great deal of potential and for a debut this is better than decent. I think I was less impressed by Withered debut and they have gone on to find themselves. Another selling point for fans of death metal is ion 2020 it is sometimes hard to find other genres of metal that are pure and not touched by black metal's influence and this is 100 percent death metal almost to a fault.