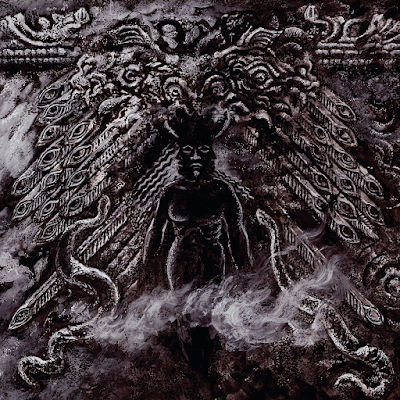 I wish blackened doom would have more. The results of what takes place with this Swedish band falls in line as what a more creepy version of Celtic Frost might sound like. The biggest difference from Celtic Frost being the guitar tone which is cleaner and not employing much of the more thrash like chug The first two song the vocals are barked in a coarse grunt . The opener is slower and the chords rings out , where the second song finds the riff slithering. It is an interesting take on doom as it has little to owe Sabbath. The guitars have the cold sound of black metal about them along with an eerie dissonance. The way the lyrics are spat out in the second song is not as interesting as their more novel delivery on the first. I think they are so one dimensional that hearing them executed in this fashion for more than two songs would be tiresome. The guitar uses more exotic Hungarian minor phrasing in the second song and some of the punches remind me of Mercyful Fate.

"En to Pan" sounds like if you did a mash up with the guitar more "Mother" and slapped it against "Don't Fear the Reaper".  Two great songs and I can respect this more because while music is not created within a vacuum, it's better than just ripping off one song.  The vocals are marginally more sung . The first word of the phrase song the rest kinda growled sort of thing.  They go into more of a death metal growl on "Set Sutekh". The riff to this one is more winding and hypnotic. More uptempo when it builds as what I normally think of as doom, but still pretty decent song. Perhaps not as original sounding as the first few songs. As the album progresses I do appreciate this more 60s rock guitar tone. It keeps them from sounding like every other metal band. There is a darker mood to "St. Cyprian" . There are some AC/DC like punches in the song that gives more weight to the rock influence. The vocals change again to a low baritone. They do not forsake the grunted vocal altogether.

"Voidsoul" finds it's chords picked out with more of a haunting western feel. The more distorted power chord parts when they do hit have a more rock feel to them. The drumming here is the most doom thing about this song, though the guitars are very deliberate like " Hells Bells".  I can deal with a doom band that is more influenced by AC/DC than Sabbath, not something I hear every day and I hear a lot of music every day. The vocal are back to the grunts, but they play even less of a role in the song than they did in the previous song. The more chanted sung vocal feel returns toward the end of the song. I will give this one an 8. I think the vocals are kind of the weak link, if they had been more compelling then I might be inclined to give this one more repeat listens . However I have enjoyed the time I have spent with this one . If you like black metal and looking for a different spin on doom these guys are onto something. Being released May 1st on Invictus Productions.