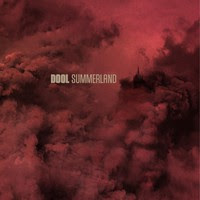 I was a big fan of their previous album. If you were unaware this band features members of the Devils Blood. They are less retro and more progressive, with a more straight up radio rock vibe. Some of this is thanks to the very accessible nature of the smooth vocals. The post punk vibe the was only a vague coloring that darkened the first album is more prominent here."Wolf Moon" has a marginally more up tempo groove. The drumming is more intricate here, reminding me a little of Alice In Chains mood wise. Until the chorus which has more of a 70s rock meets doom feel. There is more of a brooding hard rock offered on "God Particle". Her voice has more husk to it's alto creating a more androgynous tone than last time. The arrangements are also more finely tuned with subtle creeping break downs  and bridges.

There is a more simmering feel to the more power ballad like title track. They album stays moody, but as I was working on another article it began to lose my ear and fade into background music. "the Wells Run Dry" does a good job of modernizing the old formula of occult rock. "Ode To the Future" has a more PJ Harvey like strum to it. "Be Your Sins" carries more of a rock swagger to the riff. This is one of the more overt metal moments , though not the heaviest. The palm muted chug that runs as an undercurrent through the verses has a classic metal influence for sure. This fills the void left by In Solitude. I think this album mood wise has more of a doom feel. "Dust & Shadow" might be one of the strongest songs on the album it balances the dark creepy feel with jamming out rock god style with guitar solos.

There is a faint hint of the 60s feel that occult rock leans toward when it pulls influence from bands like Coven . This is jarringly contrasted by the last song "the Ascent to Summerland" that is very atmospheric and experimental almost not a tangible songs.I will give this album a 9.5, I think it's a mature step forward with songwriting and even darker .