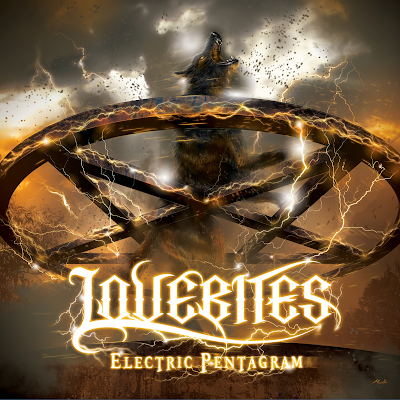 Going into this album I was afraid this was going to be something along the lines of Baby Metal. Thankfully it's not. The guitars are on the more thrash side of power metal. Their singer has more straight forward approach to belting. She belts everything rapidly from her chest register. They are not as happy as Baby Metal, but with symphonic keyboard accenting an approach that is more focused on soaring than darkness, it is happier than what I listen. It is some what Dragon Force like sonically just with less shredding. Their is a more class metal gallop to " Golden Destination". The problem is their singer while backing off from riding the guitar as much as her melodies did on the first two songs, just has one mode of singing and it is already beginning to make all the songs sound the same to me.

" Raise Some Hell" has a more rock n roll feel though the attack of the guitar is heavier. The melodies are not big on hooks. Even when things get bigger for the chorus. It's formula is fairly obvious. I even find myself so bored by this meat and potatoes approach to metal that I am having a hard time not skipping through the songs. This album is really well produced. All most to well produced. A more organic approach might have given the guitars some heft rather than sounding like an anime soundtrack.  They are good at playing fast. This however is a case in point for all you speed freaks that fast does not equate heavy.  Midway into the album I am becoming increasingly bored. It's pretty generic power metal and being hot Asian girls only goes far in porn. "A Frozen Serenade" has more of a groove to the verses . They need more of that as it gets thrown out of the window and sounds like a metal Disney song on the chorus.

Even if this album was made by their male counterparts I would be bored by this point. They are heavier than some of the more flowery power metal , for what that is worth. "Dancing With the Devil" reminds me of " The Man From Sliver Mountain". Unlike Dio they flub the chorus and make it forgettable. "Set the World On Fire" is not the Megadeth song, but it is heavier than the previous songs. It has much more thrash in it's attack though the drums are kinda sloppy. "Swan Song" might sound better to me than it is since I know it's the last song and it's almost over. Even then it's not that great. I will give this album a 6.5 . The execution is better than average, it's just what they are pulling off is a lesser form of metal. It is however more metal than Baby Metal.