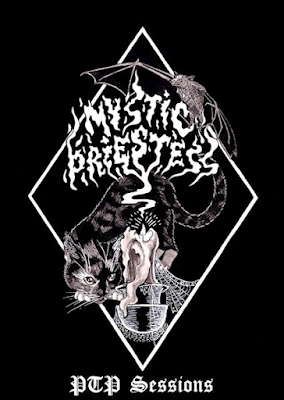 I love death rock . This might make you think I will just love any death rock. This is untrue. In fact I expect more from death rock bands. I am not surprised this band comes from Oakland. They are really all about being queer and trans. This is fine to though if this is their only angle, then I am here to tell you just being queer and playing death tock doesn't make you good. You also need to bring something new to the table rather than recycle the 80s. I already have albums by Siouxsie and 45 Grave . They are more punk in the same manner as early Siouxsie and not punk enough to touch 45 Grave.  The production value is rough. I et some of it is in hopes of recapturing a sound.  I will repeat once more for people who might have never read this blog before. Any one can get a sound. It's a matter of buying equipment and turning a knob the right way. Sounds do not take talent . What takes talent is being able to write a song. The first track on here takes a better stab at this than "Spiny Wings".

The bass is often  lost in the mix which kinda screws up the whole death rock thing. They do have the death rock guitar sound though., The drums are pattering around in the background some where, you might here a cymbal crash from time to time.I prefer the feels of " Eternal Resurrection". The lyrics kinda fall by the way side.  Midway into the song things get murky. "Blissful Myth" kinda blows past me with it punk attitude fueling what otherwise sounds like they threw there equipment down the stairs and it just happens to make a few notes happen on the way down.  I am however into "Where Were You". The production could be better but they prove they can write a song. Things kinda drone on with a little bit of a circus feel though more Halloween than say the Doors, who also dip into circus music. You do get to hear the bass in this song which is an improvement .

I was getting dressed while the last song was playing and though there were kids yelling outside in the neighborhood, then realized it was this song. This is not one of the stronger moments. I will give this album a 7. So it's more entertaining than not. It is however far from stellar, but if they go into an actual studio and took some time they could evolve into something with potential . Anarchy alone will not save you.