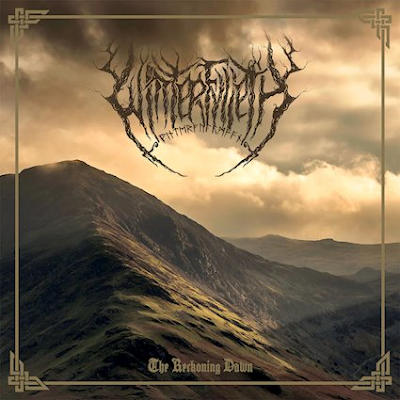 Not our first go around with this British black metal band. The first song rages at full speed and a hateful snarl just like you expect from black metal. This is not as impressive as the more mid-paced "a Hostile Fate" where you can hear more texture and melody from the guitars. This gives the vocals more of an emotional contrast. It is not the greatest song , but it takes the more traditional approach to black metal and gives it a more personal touch. That can be difficult when you think of the bestial blur you are normally hit with by the genre. They lead into "Absolved in Fire " with an acoustic guitar and strings. This is where I first notice how well produced this album is. It does build up into the more black metal blasting though a very sweeping take on it. The scathing vocals here sound par for the course. In the last few minutes of the song the gallops grows amazingly aggressive.

Things are less impressive on the title track which just sounds like black metal as usual. They are good  at it and captured all the sounds well, the problem is that I have heard that kind of thing countless times over the course of the past ten years. There is some melody thanks to the guitar , but that alone is not enough to keep my interest in a song. They speed into " A Greatness Undone". At this point it really depends on what you want from music. If you want a sound that you like and do not care if the song really stands apart from other bands with the same or similar sound, then this might be for you. It is a shame because the album really got off to a promising start. I have had albums by these guys in the past I enjoyed, but perhaps that was before I got burned out with this sort of thing. Four minutes in there is a more melodic break down. I think what I need is to hear this kind of thing worked in as a more fluid part of the song, rather than an obligatory reminders they appreciate melody. As it progresses it becomes more a question of restraint. They throw in an acoustic interlude for good measure just to double up on this but what I am wanting is still to hear this sort of thing as a working part of the song rather than window dressing for blast beats.

We are back to said blast beats on "Yielding the March Law". The vocals pattern seems to have a little more form and function than just screaming for the sake of screaming. It accents things in an almost hooky manner. The mood grows a little more ominous for the last song which finds them raging back into battle. But since it's titled "In Darkness Begotten" it would be a sad thing if it was not darker.  This is very well done, so despite falling into the rut most black metal bands do I will give this one an 8. If you were going to consider these guys a black folk metal band, then you should think again, There is still Bathory influence, and I suppose Summoning as well, just to a lesser extent in terms of atmosphere. This album comes out May 8th on Candlelight Records.