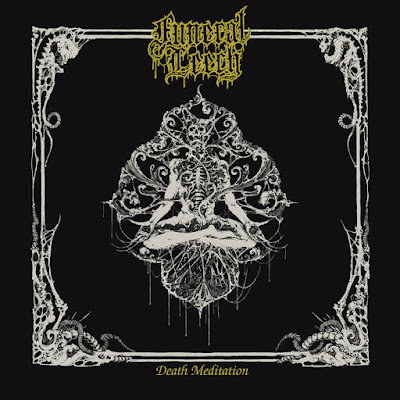 The death doom keeps coming. These guys are certainly at the heavier end of the spectrum. Using density to convey the aggression of death metal while their down trodden mood casts a dismal shadow over the song, They are felt with their rumble as much as they are heard. The vocals are a low growl part funeral doom, part death metal. The pace picks up a little thanks to the guitar on the second song to give more of a death metal feel. When they lock into these chugs the guitar sounds like a rain hammering it's way through molten lava. Midway into  the second song the fact they are heavy as all hell begins to wear thin.

Things get even heavier perhaps, at this point sonically it's a lateral move. But do they get any more interesting or drive me to want repeat listens of this ? No. That is where song writing comes in . One thing I seem to constantly have to repeat is that after a song of being extremely heavy I am always forced to ask the band "But can you write a song?" The other thing I have to repeat here is "cool riffs alone does not a good song make" . There needs to me melody and dynamics. I get in some genres like say grind core melody is not big on their to do list. What makes a band like Nails work is they put every thing in the right place. But this is a different scenario than Nails altogether you say. Then take Mournful Congregation, Pulchra Morte or Loss, all very heavy bands in different ways which parallels can be draw between those bands and what is going on here. They all write songs that make you want to listen to them again. By the fourth song here things are becoming largely forgettable and mush of distortion as it begins to run together.

"Morbid Transcendence" finds them going in a more death metal direction. I ask you what makes this stand apart from other death metal ?  The answer is nothing. What  do they do here that I have not already hear Incantation do? Nothing. They begin to run out of creative gas at this point and this fades into the background after beginning to bore me. Three minutes into the song and it already seems like we have heard enough. Sure they are switching gears and going in a more doom direction, but we have already heard it.  I will give this album a 7. It starts with some strong sounds , but needs more in the way of songs. If you just want really fucking heavy this is for you. Out on Carbonized Records.