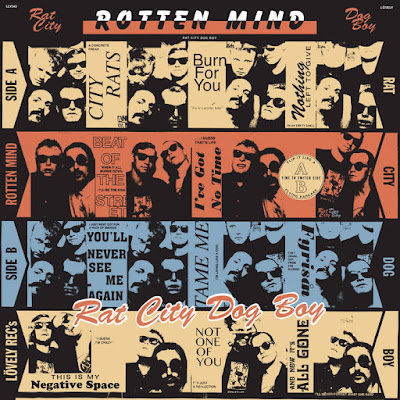 Since Iceage cane along it's been brought to my attention that the best punk is coming out of northern Europe. This might sound like a very me thing to say, but it seems to hold weight when you give this Swedish band a spin. They first song is a fun rowdy clanging. There is a staccato bounce to the guitar. It is what I want from punk. They win you over with their energy. When they go to the well a second time with this it does not work as well. It is a good thing they can do more than punk.  To say they are just a punk band would over simplify things. They are also garage rock. They have a rambling rock side to their song writing that can be heard when they as they  hook you in when they sit down and think about how they feel. "Beat of the Street" splits the difference between thoughtful and attitude.

They bring back melody and more hints at their dark side on " I've Got No Time". This is how as a punk band you can overcome the rule of cool riffs alone does not a good song make as take the riff and make it throb so it goes something to explode out of .In comparison to the mood of the previous song even the bleak celebration yelled about on "You'll Never See Me Again" comes across as up beat. The singer actually sings as many notes as he yell and wraps the two modes of expression tightly around one another. This counter balances the moments that find them beginning to fall into the gutter of more typical forms of punk. It is when the band falls back into the tension of the shadows to summon something more like post-punk that they really shine. Of course that is what I would think given my taste for darker shades of punk.

"Negative Space" finds them in more of your everyday punk lamentation. Fun , but you have heard it all before . They get back to feeling the songs more on "Not One of You" which adds enough of a sonic touch for me while being true to what your average drunk punk would want to listen to. When the switch to the acoustic strum of  the last song, I appreciate wanting to shift the dynamic of the album , but feel they do that with more inspiration behind them on other songs. I will give this album an 8, its a fun listen. It was released on Lovely Records.