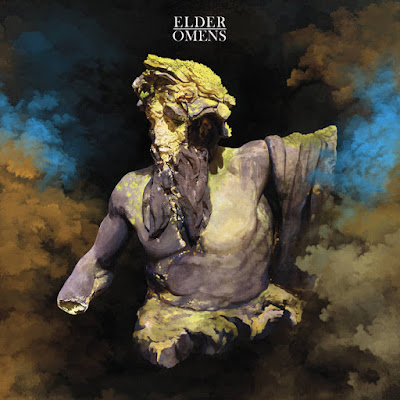 These guys are highly talented. What they are not and this needs to be said as there always seems to be confusion when people are making their end of their year lists, is metal. There is a more ballsy Baroness like approach to the opening track of this album. I recall the vocals not having this much testosterone behind them on previous listens to their stuff. But this is there fifth album and I have only really listened to the first one. There is a jammy quality to their brand of prog rock. If you were to guess why I am not totally sold on these guys you would not need to get much further than the first five minutes of the ten minute opener to hear these guys are not particularly dark. If you know me and my tastes then you will know 88 percent of what I listen to not matter the genre falls under dark. In fact that is the mission statement of this blog to spread sonic darkness. With that said good music is good music so I am open to veins of it that are not wrecked with despair. I do not smoke pot any longer, but when I did I was much more impressed by this sort of thing. Time stands still and you do not realize you have been listening to this song for that long and your Hot Pockets are still in the microwave.

Midway into "In Procession" it feels like they are caught up on the math of the notes they are playing and the song itself is meandering a bit. If you play guitar then perhaps this kind of razzle dazzle is your thing. I like it when King Crimson is doing and I like old Minus the Bear, after that I am not impressed unless it is flowing. It begins to flow around the six and a half minute mark. At that point it's beginning to fade into the background. I think this is better executed on "Halcyon". Here most of what they do is firing on the cylinders that my ears find most pleasing.  At almost 13 minutes we still have a lot of time for the song to wander off . "Embers" finds them taking a more upbeat slant on what they have already been doing up until this point. I do like the subtle sonic build this song uses .

The album closes with "One Light Retreating" which has more groove to it. I think if I could have asked anything more from this album aside being dark it would have been for more groove. This album is not the first time I have picked up on the fact that before this band it is more likely that these guys were playing indie rock rather than 70s prog. The prog must have come once smoking weed became cool again. The good and the bad can be summed up like this . This is an album I can just leave on an let play, that's good. Not as good as when I do this I can not tell which song I am on as they all run together, so not big points on songwriting they are more jammers. I will give this album an 8.5.