In the Company of Serpents : " Lux" 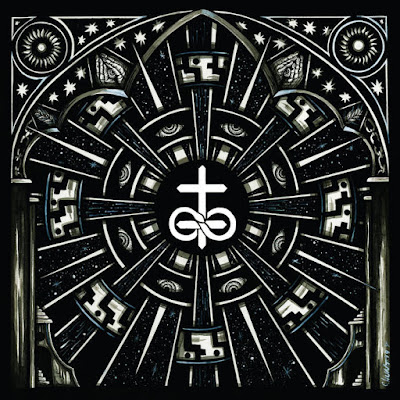 This is not our first ride with the Denver band who continues to evolve. They have an even more massive sound they slam into your ear drums with some rather punishing sludge. Sometimes they hit you with an almost thrash like speed. The things take a turn down the dark wild west on " the Chasm at the Mouth of the All". It has a cool slithering groove but until they kick into the metal at the one minute mark seems like a wild departure from what they hit you with on the first two songs. The vocals were more of a dry howl on the first two songs , then they get Nick Cave here with a low whispery baritone. The clean guitar tones are very organic. This album is very well produced all the guitar tones are dialed into the max be they fuzzed out with distortion of acoustic. This only aids in the albums dynamic range.

The bellow of  throaty vocals falls some where between a growl and singing on "Lightchild". It owes a great deal of the sound to the more groove laden moments of later Neurosis. Think "Given to the Rising". There is some rock swagger in the variations of the chug employed here. For this type of riffy metal it's very well thought out and not just pulling riffs out of their ass. They add more attack to the chugs that take on more of a gallop with "Archonic Manipulations " . The vocals are more of an after thought here. They focus is clearly on the guitar as the drum lag behind the wall of distortion hurtling at you. They use an atmospheric interlude to segue into the western strum of acoustic guitar of " Prima Materia" . This builds up into a very groove minded take on jimmy sludge.

Perhaps not as many jammed out guitar heroics as the previous album, it feels more aggressive and the songs are more focused. The more country and blues based sections feel more organic here and work in a fluid way with the songs. Not a huge departure from their past sound, it is more refined and the dynamics feel like they are going further into the direction in which they have leaned toward in the past. I will give this one a 9. It's really well done and might cross the band over into the metal mainstream as fans of bands like Mastodon, can find plenty to grab onto here. This album comes out May 15th

Email ThisBlogThis!Share to TwitterShare to FacebookShare to Pinterest
Labels: " Lux", 9, album review, In the Company of Serpents, sludge