October Falls : " A Fall of an Epoch" 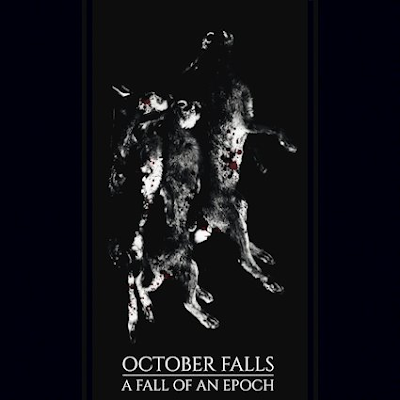 This Finnish band sets themselves apart from the bulk of the black metal bands in their country by giving it a folk slant/ All too often black folk metals means If a band doesn't sound like Bathory or Summoning , then they are only adding acoustic guitars or pan pipes as window dressing for what is just blasty mcnasty without these bells and whistles. The fist two songs are not reinventing the wheel,  the guitar melodies, are true to black metal while keeping a dark mood and melody rather than a drone of tremolo picking. They are also sparing with the blast beats. If they have employed any in the first two songs, they slipped them past me. The vocals unfortunately are more of an after thought. They are mid range screams. To clock in at ten plus minutes these songs work off a very similar progression and there are no wild shifts in the arrangement or dynamics. They have taken their time, this is the band's fifth album in 19 years. So they are not just pumping them out .

The blast beats do show up on "the Ruins of What Once Was". These smooth things out into an epic sway as the song flows on the same cold waters upon which the first two were set sail upon. At the Minute and a half mark is the first time they divert from the metal to drop in some acoustic guitar , but then they throw themselves back into raging as they were. This is done almost as if they are trying to meet some unspoken folk metal quota for acoustic to electric ratio. If they fail to meet this then a druid will come and turn them into trolls. They are angrier on " Hammering the Tide" but relax enough for another acoustic break to keep the druids at bay. They come back in with the triumphant build that feels like a more emotive version of what Summoning did. They are very good at what they do. I do not dislike what they do, but it also doesn't catch my ear. It does fade into pleasing background music. There are more shifts in the arrangement of "Hammering the Tide" , but unless you are really paying attention , it is not enough to make you look up from what you are doing and say "damn this shit is good" or bang our head.

By the time we are at "Food For the Drought" it has all begun to sound the same. If you listen to these guys all the time then you might notice the subtleties. I listen to more than my fair share of black metal and unless something really stands out from the pack, once you establish the mood is here some of this all sounds the same. What they do have going in their favor is they are able to maintain the status quo without being the lowest common denominator due to blast beats. Very well done, but all too familiar so I am giving this album a 7.5 , if you are a huge fan of this band then everything you listen to must sound the same so go head and round it up to an 8. This is being released May 30th on Purity Through Fire.