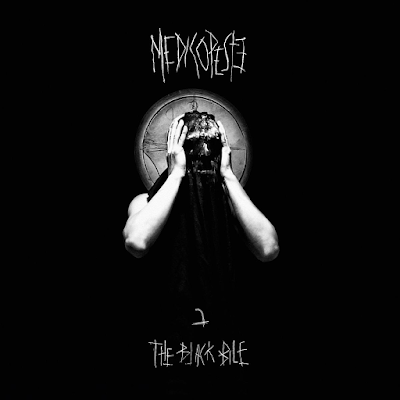 All too often we talk about orthodox black metal. As if the ritual of it is going to wildly spin the wheel of  status quo. We need to think about unorthodox black metal. Wild wolves not afraid to break the rules like this band. When you hear what this Polish band is churning out here the first though is .. This different. There is a great deal of space to the opening track, though they do not compromise much in terms of aggression. I think this helps them sound different than every other blackened death metal band. "All Too Human" stars off more straight forward metal chug, before spacing out into very sinister and dark atmosphere. Sometimes the more declarative vocal sounds more black metal along with the tremolo picked guitar. In truth they are like a darker less mainstream version of Behemoth. "Numinous Catastroph " is chaos. It is ruled by icy dissonance.

Things really go down a deeper chasm of oddity on " Were Saviors Believers? ". The angular staccato groove gives the song a new found sense of dynamics as the vocals take on a more demonically tortured croak. Midway into the album I am not sure if they are black metal or not. I prefer that over the same old blast beats again. "Skin" throws them somewhere between Deathspell Omega and Ulcerate. The drummer is more influenced by jazz than early Darkthrone.  The song itself gets a little murky despite the excellent drumming. They get more melodic on "Holy Opium" but in the creepiest way possible. The vocals  come close to singing in the same way the vocals to Entombed do at times.

The album closes with the title track. Things stay in the same black depths they have for the entirety of the album. The drums and guitar lock into a more hypnotic pattern, though it churns down a path that stays within the dynamic realms of similar waters. There are few explosive bursts, that are more jarring. The build is both melancholy as well as sonically heavier. They excel at keeping tasteful balances in what is otherwise a very abstract approach to songwriting. I will give this album a 9, it outs them solidly on the map for me, if you are into black metal that takes chances give this album a shot.