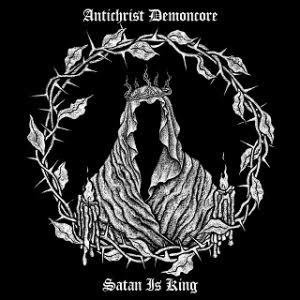 Just how heavy do you want it ? That is the quest this band asks. The band's name might be a play on AC/DC in how they write it as it stands for Anti-Christ Demoncore. It is heavy but nothing sounds particularly evil. I like heavy music. I am almost finished making my top 50 heaviest albums list, I am fine with Grindcore. My thing is there still has to be songs. I am into songs. Any one can create a sound. Not everyone can write a song. These guys throw everything into quick spastic bursts. I love Portrayal of Guilt, so I have not problem with this approach as long as there is song writing involved. I remember the first time I heard Anal Cunt it seemed more like a gimmick to me. These guys re like Anal Cunt, but without the sense of humor. I was skeptical going into this album. It has a great title so of course I have to cover it. It's the title track that this formula actually works. These guys have more of a death metal influence than many grind core bands. The title track proves this minute and a half song structure can work .

"Turncoat" breaks the two minute mark. The also slow into something more grinding than core. It even gives them time to have dynamics by going into the faster spastic part.  These guys made a name for themselves in the underground. This is their first album for Prosthetic records and they are clearly making no attempts to tone things down. Nor should they. I think you can be this heavy and still write songs with varied sonic colors. Instead things can be very monochrome. This is when it begins to feel like feedback driven noise. The drums sometimes get buried beneath the guitar being vomited up here. They find their way back into songs on "Propaganda of the Deed". The guitars have a mean fucking sound that is put to better use when locked into a more solid chug. There are moments when they just blast ahead and the higher snarled vocal spurt out words that are barely discernable. These are not the albums finest moments.

To their credit it is easier for me to keep track of where I am at in the album than many bands who do this thing. They are good at what they do , just not the best, nor are they breaking any new ground. You have heard other bands do all this before. When some hard core influence does slip into to what they are doing it sometimes helps pull everything together. Tis demoncore works well on "Ashes to Ashes". Not as much on the more punk "Back in Black Bloc". "Maggot Museum" breaks the two minute mark. They do not use this time as wisely as they could. I will give this album a 6.5 . Yes it is heavy as fuck, but we have heard it all before.