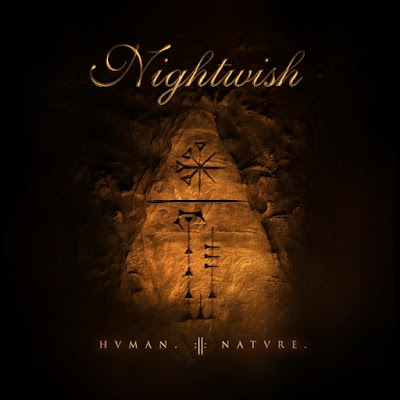 "Dark Passion Play" was the last album by these guys that I was super into . This is my first time with them since they joined up with Floor Jansen. She is has more of a Kate Bush influence in how she phrashing things with a more progressive touch, than the gothic symphonic soprano of Tarja. Annette was more rock n roll mixed folk. The progressive touches extended past Floor's vocal stylings and into the arrangement of the opening track. There is more of an operatic drama to "Noise". It is also more metal . Though overall compared to their past work the metal side of the band has been dialed back. The male vocals backing her don't have the kind of grit they used to. What plays into the song's favor as the drive it has.

They retain the more progressive touch going into "Shoemaker". The male vocals play a larger role when the song breaks down. They have a more set formula with their sound than the song writing here. Things are so well executed and produced it's hard to fault them for anything except maybe not being as heavy as they once were. "Harvest"  is so happy it sounds like it could be Christian rock. "Pan" starts off  more piano than flute which thematically is a problem. I can also here how some of the theatrics are beginning to get to me. The trashier guitars are a plus though. I think part of the problem is the bass is low in the mix. Having the bass more present in the mix particularly when you are dealing with music that has power metal tendencies is important, because you can have operatic bombast and still sound heavy, case in point Iron Maiden.

"How's the Heart" is more radio rock, but it is well written. The melodies are strong. Two things that will sell me on this kind of music. I think one thing that says a great deal about this band is how after the first two singers they still manage to retain their sound no matter then singer, that sound is just more metal at some times than others. "Procession" works for what they do it's subtly darker than the previous ones. They get even darker and heavier with "Tribal" which proves you can still have symphonic elements in your metal if you do it this way. This is without question the album's heaviest moment so far." Endlessness" is back to a more progressive melodrama. The bass sound improves. The male vocals take on a little bit more of a rock touch, it is not as aggressive as what they used to do. If they had made a rock version of "Cats" the sound might have been similar. The vocals are almost whispered, that makes me wonder why does he not sing with more balls, is it his age?

Did I mention this is a double album? Well it is. They continue the conceptual sounding theatrics. "Vista" is almost so symphonic that it sounds like it is from a Disney movie. This second album is not metal or even rock, it's more like a film score. Since they are more like movements in a larger symphony they run together "Moors" stands out as it uses more folk instrumentation. l will just score this based off the first album and not the symphonic second one, which plays to the band's favor.  I will give it an 8.5, better than most of this sort of thing, though a clear example of why I do not listen to this sort of thing in the first place.