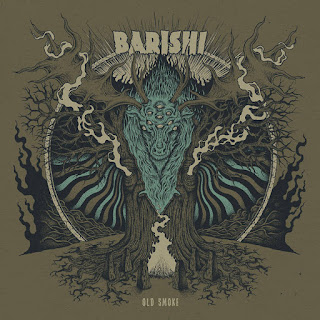 There is a fair amount of hype around this band. They get billed as all sorts of things, but while sludge is a major influence on some of the riffing, they are at heart a death metal band. There is a progressive angular dissonance that colors some of the maze like arrangements, The unique approach to death metal they take is more breath taking on the first song as "Blood Aurora" is a decent song with some cool chugs thrown in, if feels more like business as usual. There was more atmosphere and sonic weight to the almost 11 minute opener. The vocals were more of a lower growl on the first song and snarl with a more mid range tone on the second song.

If you miss old Mastodon then you will love the song "the Longhunter" . It has more prog to the winding riffs than the previous songs. It also manages to have more groove than the previous songs. The front end still carries some chug to it. The vocals are growled even more harshly. After a brief acoustic interlude to prove they can play without distortion, the return to the same Mastodon burial grounds they started haunting on "the Long Hunter". This comes across more like Atlas Moth as it is darker. Normally this would be a winning direction, but it lacks the groove that "the Longhunter" did so feels more masturbatory. There are few cool chugged riffs here or there , but they are lost in the swirl of this song. Similar to when I ask really heavy bands that I get they are heavy but can they write a song, the same applies to progressive bands of any genre, I get they can play their instruments , but can they write a song. In my mind these guys have proven that the question is can they maintain it and blast beats with guitar solos do not make a case for that. It begins to bore me.

It is a good thing they back off on the last song as it is over 13 minutes so they more nuanced approach that backs off the distortion to simmer in a Baroness manner is important. There are sung vocals which are low and almost more spoken though more melody is added with each phrase. They hang on this for four minutes then get heavier and the vocals shift back to what they have been doing  This last then the shift back to the more spacious clean tones that they jam on a while. Not the most original thing out there, but they do what they do well. Only once do they les their prog get the best of them so I will give this one a 9 as it is really well produced and executed. Angrier than your average prog metal, but not without soul like tech death. />