Life of Agony : "the Sound of Scars" 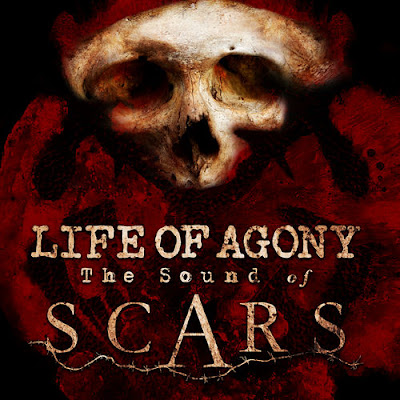 All I care about is music . I do no care if they are Keith or Mina, what I do care about is can they sing in the manner needed for Life of Agony. On their 2017 album this was a no. They have remembered who they are on "Scars".  The vocals have more aggression and grit, allowing the guitars to follow suit. It is not as hard core influenced as the first album , but it's the heaviest thing they have done in years. Their new drummer proves herself more than capable. Alan Roberts and Joey are still holding down the song writing so it's only up Caputo to pull off the vocals . The album sounds great and they are delivering the kind of performance that makes me wonder what happened on the last album.

"Empty Hole " is another return to form that picks up where "Ugly" left off. This song is more rock n roll , but as long as Caputo is doing their thing I am fine with it. By doing it , I mean measuring up to their performance at least on "Soul Searching Sun" . "My Way Out" is a more deliberate tension crunch to it. The vocals carry the needed heft on the chorus here. Yes, Have to pick on Caputo as their  voice is what sets this band apart. The guitars find it easier to hold up their end of the bargain.  The drummer really steps up on "Eliminate". This might not be the album's best song , but they have been hitting them out of the ball park so do not lose any momentum. I am fine with them breaking it down for a moodier tone on " Once Below">. The backing vocals are little cumbersome. This is balanced by the lead vocals being strong.

They work work off the kind of strong grooves that make the most sense following "Ugly" , so once again on par with "Soul Searching Sun" . Not the hookiest song on the album, but it works . The last two songs are more rock n roll , I think of the two "I Surrender" works the best. It's darker a Caputo's voice feel more natural and inspired.I will round this one up to a 9.5 , I think it's a fine return to form and Caputo has found their real voice again.