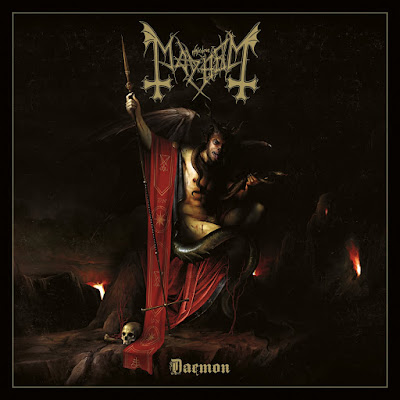 This album doesn't fuck around . They go right into the blasting. It's still ark and broken up with fiendish gurgled snarls of Attila. The two members around for the drama the band is noted for is the bassist Necrobutcher and drummer Hellhammer. Hellhammer is one of the best drummers in metal;,. so he is the driving force behind the album. The second song is more interesting than the first. There is more thrash to the riffing thanks to the guitarists who came from Cradle of Filth and 1349. You can hear traces of both bands. "Bad Blood" is sadly not a cover of the Taylor Swift song. It is a fair depiction of what they do as  band. Enough blasting to show they mean it, yet melodic enough to keep my interest.

There is a more seething level of creepiness going into "Malum". Any way you slice it Mayhem is black metal. They do fall back on their past and tend to try to recreate "Death Crush" in a few places. Lyrically the emphasis seems to be back on black magic.  They are not just clocking in a retreading their sound, but they are not taking wild chances either. It's different enough to satisfy.When they linger in the dark and restrain themselves from pouring on the blasting the results are best. Wiht Hellhammer on the throne they can do whatever they want and it is going to be done better than the bands who aspire to be the next Mayhem. You can hear how even a band like Watain who many accuse of just picking up where Dissection left off has even drawn substantial influence from this band. The more predictable moments are still done with a great deal of heart.

One of the albums best moments is where they slow down and get darker and creepier for "Daemon Spawn". They speed back up with "Of Worms and Ruin". He uses his more croaked vocal. There is a dark dissonance to "Invoke the Oath" that I like, but as a whole I would say this album plays it safe and stays well within the bounds of conventional black metal, while retaining their thumb print.   I am not going to say this is there best album. It is a suitable Mayhem album that meets though perhaps not exceeds expectations. I will give this album an 8.5, better than the bulk of their peers , but not one of the years best black metal albums. Perhaps it will grow on me.