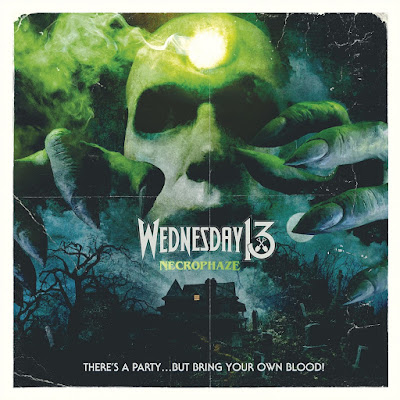 These guys are picking up where they left with the Murder Dolls. In some places they take on a more Rob Zombie like sound , but over all they are gritty take on goth metal that sounds like it could have crawled out of the best places from the 90s.  Alice Cooper lends his voice to narrate the intro of the title track. Christine from Lacuna Coil also shows up on "Monster".  Her voice sits behind Wednesday's in the mix. He is more attitude than than pipes. He carries a lot of grit , but manages to hold a melody. He knows where to put his voice though and that speaks a great deal to what what works in terms of the song writing on this album. I just got finished reviewing the new 69 Eyes before I hit this album and how phrashing can work to sell lyrics, though the lyrics on this album are superior to the 69 eyes by a long shot. The are way more fun.

"Decompose" is more metallic and finds him singing in a higher almost Blackie Lawless like voice.  This influence is not unfounded as the last song on the album is a cover of "Fuck Like A Beast"> The main riff is pretty bad ass . The double bass heavy "the Hearse" doesn't strike me as being quite as inspired as the previous songs. "Tie Me a Noose" is marginally better  due to the groove. This also makes me think Static X jamming with W.A.S.P.The melodic touches around the guitar to "Life Will Kill Us All" is more interesting and it works with more rock n roll vocals .  The chorus is almost cock rock, but I am fine with that . This is more straight forward than the others songs, but works together well. There is more of a punk feel to "Bury the Hatchet".

Alexi from Children of Bodom joind him on on the cover of "Fuck Like  Beast ".  It is such an awesome it is hard to go wrong with it. They do a pretty good job with it as well.  This album was a lot of fun I will round it up to a 9. It's a perfect album for this time of year.