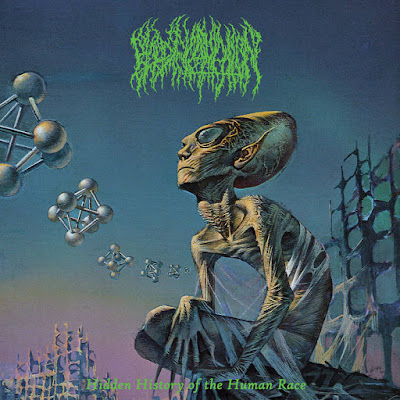 The album starts with more of a Morbid Angel groove, so I think

"ok, well another band who wants to be Morbid Angel, things could be worse"

Then they take some twists and turns . Progressive without being wankers. The song winds in a serpentine fashion while still being taunt and aggressive . I  say then lean more toward progressive death metal than technical as they do not just throw odd times at you and a bunch of jarring jerking to compromise groove. In fact it is about the groove more often than not. There is a exotic middle eastern flavored break down in the middle of " the Giza Power Plant" that is pretty amazing. The dynamics are dialed in. In other words this is how to do death metal and proves you do not have to just write in monochromatic blood red. When the more hammering technical parts come they are justified because we have already gotten some form of sonic contrast.

Aside from a lone growl, "Inner Paths " is an instrumental. It's progressive and not. The song works off of a consistent them with layers added and nuanced playing to accent this.  Two and a half minutes into the 18 minute sprawl of " Awakening From the Dream" we get into things that are more groove inflected and not the more typical barrage of death metal. 18 minutes is way too long, so the pressure is on to keep my attention. The melodic yet heavy guitar playing helps with this cause. Six minutes in it drops all the way out into dark ambiance. Coming out of this are guitar solos and what you might expect from most technically proficient death metal bands with some thrash influence to them.  They do  find s groove or two along the way.  It slows into something with shades of doom.

Overall perhaps not the perfect album, but an excellent death metal album that is ambitious and not afraid to strive for more. I will give this album a 9, if you like progressive death metal rooted in the classics then this album is more than worth your time. If you liked their first album you will find more of what won you over. Thius album is being released by Dark Descent in November.