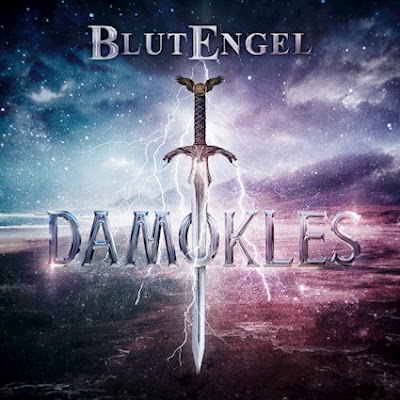 German dark wave that could have come right from the 90s could be the beginning and ending of this review. What I am looking for are the pieces of atmosphere that set them apart from this mold. These seem to be in the female vocals haunting the edges of the title track that opens the album. They take on a more militant Rammstein like feel on the song, but it manages to be dancey in the Sisters of Mercy vein. Very 80s synth sounds color this song. Things stay centered on the dance floor for "the Search". It plays it a little too safe and is pretty color by numbers and the only color is dramatic black. "Strong" is in the same zip code, it just does a better job of conveying this concept. More groove and better hooks, pretty much what you want from any genre.  "Breife An Dich". finds the female vocals more prominent thanks to Kira, so it's a few shades to the left of the other songs.

I am skipping the re-mixes for the purpose of this review, as having two version of the same song on an album makes little sense to me. There is a darker sound to "Another Dream". This is an archetypal goth song. You can hear this playing at any goth club anywhere.  The vocal melody to"Hourglass of Life" is the best thing song has going the beat and the snyths are not doing it any favors.  They get some better synth sounds on the more uptempo "Fire & Ice". The vocals are more aggressive. Well aggressive for what they do. Not aggressive if you consider the other kinds of music I cover here.  Lyrical the singer confirm he is a big submissive so I can not relate to them , but takes all kinds. "Stardust" is pretty much what you expect from this project. Aside from sampled sounds it doesn't bring anything new to the coffin.

"Running Away" works off the same groove and melodies  that have kept the gas in this album's tank thus far and by now it is on fumes. At least for me, if you are  fan of what they do then this will meet all of your expectations. For that reason I am going to give this album an 8 as they succeed in doing what they set out to do.