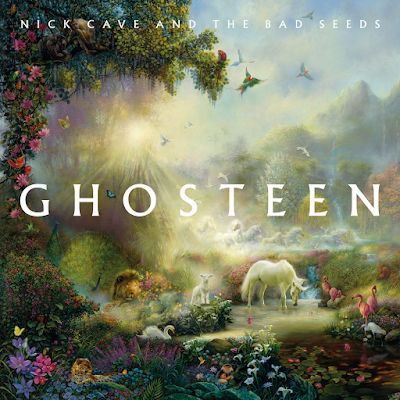 it comes to aging Cave is doing it better than Iggy Pop. He has been heading in this direction since 2013 's "Push the Sky Away" This is supposedly the third installment of a trilogy, though I am not sure how this album has anything to do with the two previous ones, particularly "Skeleton Key" since that album was written in the wake of his son's tragic death.He is locked into the the same kind of atmospheric folk ballads that he indulges in. To the extent that the opening track sounds almost just like "Jesus Alone" from the last album. I do appreciate that he makes an attempt to sing up in his head register. As long as he is crooning I am fine with it. I am not sure about when he goes onto the more spoken word songs which are kinda boring at times. 'Bright Horses" and "Waiting For You" are both very strong due to their emotive nature. His voice sounds better when he sings and age creeps into the narratives on the spoken word parts. If he circles back around and sings well at least that gives the song more dynamics.

The Bad Seeds are a great band, that are being tragically under used here.It is not surprising he is just  one tour with a piano as aside from the layers of ambiance he doesn't need them for much more. In this way I find "Galleon Ship " more interesting than "Sun Forest".This album will appeal to long time fans despite the fact it is more morose than it is dark.In fact in places it shimmers more like a Sigur Rios album. When you consider the title track is about the ghost of his son then there is still a Halloween theme here. Percussion finally comes in on"Leviathan". The bulk of the arrangements are fairly minimal minimal. Things that are multi tracked are often choral vocals and strings , both of which make their tapestry felt here. The title track vs "Ghosteen Speaks" finds  the ghosteen theme more hopeful when it is dancing in his head rather than speaking.  It is also more sprawling a cinematic with the string arrangements.

I am sure the kind of reflective poetry he engages on with "Fireflies" is therapeutic for him, as a listener I do not find it to be as engaging. "Hollywood" is darker . I guess thematically as it should be.He splits the difference on the spoken word element and phrases it in a way that hooks me in more. I will give this one an 8.5, it is marginally disappointing it is not like he has not already given us an album like that, but perhaps that is where is discourages me. I would consider this a success if it was any other artist , but I hold Cave to to a higher standard since with great talent comes great responsibility . I think I am clear on what I was clear about what I like in regards to this album so no need to rehash that . It is solid, but the depression has him locked into this one haze. .