the Great Old Ones : " Cosmicism" 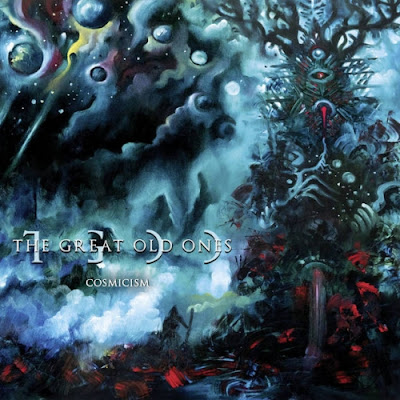 It's a great month for atmospheric French bands . For a album to be Lovecraft themed and not join our Halloween features it lets you know how dark we get things around here. for Gothtober  There is more of a black metal feel to this one.  Rather than going for more over forms of creepiness, they are sticking to black metal  just giving it an undulating pulse.There is a more sinewy feels to the guitars then I remember them having . This is a great deal heavier than previous releases . Right down to the snarl of the vocals it is also a great deal more black metal. There is  a darker chanted section on "Of Dementia", but it is also countered by a huge dense chug. "Lost Carcosa" is more aggressive and plays closer to the safe sound spectrum of black metal. There are some really interesting riffs thrown in along the way, but the rule here is cool riffs alone does not a good song make.

There is more dissonance to "Thousand Young". The vocals are beginning to make me think more of Immortal. I like when they are playing fast without blast beats . The guitar playing is really good and the guitar solos are certainly on point. The songs are dark for sure and took many a twist and turn. I would not say their sound is based upon atmospheric drone, but in someplace it can come to the forefront. They are more full blast ahead on "Dreams of Nuclear Chaos". It succeeds at being nuclear with it's power and chaos with it's composition. "Nyarlatholep" is darker and more deliberate. They have proved to me before that they know how to write songs. It breaks up almost like Pantera song with the bass holding the groove and a low more spoken vocal.

The album ends with "To A Dreamer". It is like most of the album dark and dissonant. The riffs kind of jumble together and I lose track of what is going on as it becomes a chugged blur. I give them credit it is not due to blast beat mania , though there is enough blast beats to satisfy most black metal fans unless you are looking for old Darkthrone and in that case go listen to old Darkthrone. I will round this down to an 8. It sounds great and starts strong though the deeper into the album the more variation I need that I do not always get.