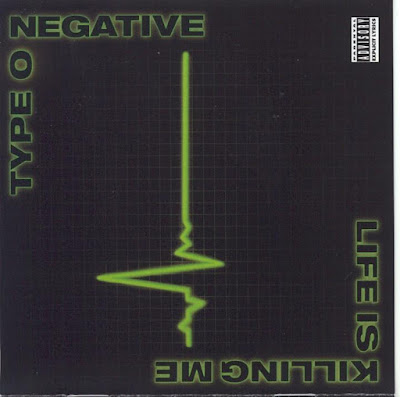 Giving a listen to album I am nominating for the top 20 goth albums of the past 20 years list. "Dead Again" was good, but I feel this one is going to do better. "I Don't Be Me" is the more uptempo punk side , but smoothed over and allowing Peter Steele to really use his voice. "Less Than Zero" find the band dipping into a dark psychedelic sounds .. The vocals are one of the main components that make these guys great and they are standing up against their most classic songs here. "Todd's Ship Gods" is good but kinda wanders in the middle road. "I Like Goils" is tongue and cheek up tempo punk, with a homophobic slant that is laughable due to the fact at the end of the album they cover "Angry Inch".  The Hedwig cover is well done and clever. "A Dish Best Served Coldly" captures the sound I want from this band. Dark and melodic but wit ha doomy punch.  They heavy groove they lock into midway into the song is great.

"How Could She" takes another metal groove to stab you through the heart with what the lyrics are processing here. The "why don't you love me " line is one of the strongest hooks here.  For these guys the songs are written in a very concise manner  with nothing sprawling out over the eight minute mark. There is a doomier tone going into the title track. There is some swing to the Black Sabbath riff this one groove off of. "Nettie" is a n underrated song that I forget about. The vocals are amazing they go from his lowest register to his higher croons. The dark love song "Electrocute"  takes a great deal of inspiration from the Beatles at almost every direction the song turns.  Midway they hit a cool groove.   "(Gimme That)" finds another balance of heavy and 60s infused melody. "Anesthesia" is not the album most memorable song, but it works.

The album closes with "the Dream is Dead" .  It's an alright song, not the strongest, kinda dialed in, but hitting all the right marks for what they do. I will give this album a 9.5 so it edges out "Dead Again" I think the strong songs on this one are stronger than the strongest ones on that album,.

Email ThisBlogThis!Share to TwitterShare to FacebookShare to Pinterest
Labels: "Life is Killing Me", 9.5, goth rock, gothtober, Looking Back in Anger, Type O Negative '