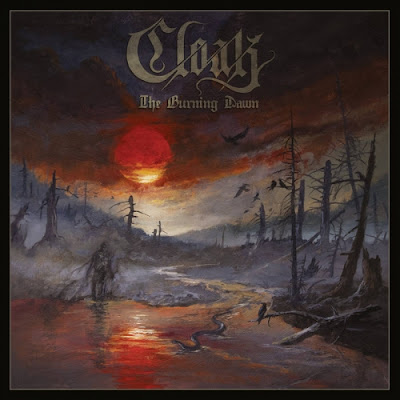 The goth word gets thrown around with these guys when they are more blackened form of metal, though very melodic. Black metal and goth are easily wedded since darkness is a prime motivator for the sounds of both genres.  A straight up black metal band might not be Gothtober material , but these guys are more flirtatious with black metal than committed to it. They are very committed to sounding Swedish .  After their first album the question I had going into this album is can these guys show me who they are without simply pulling from the books of  Dissection, Watain and Tribulation?  Vocally the answer is no. At least for the first song. It is like a toned down less blast beaten version of Watain.  The first song does not have the same level melodic rock sensibility. The guitar tone is more dialed in and some of the chugged riffs are heavier and cooler.

That Tribulation rock thing I was just mentioning shows up on " A Voice In the Night". There is a catchier chorus making it evident they have polished their song writing chops. They blend the shadows of their sound with articulated clean guitar and take you on more of a journey. They pick the pace up for "Tempter's Call". The vocals stay in a languid snarl leaving most of the weight on the guitars. There are sung vocals tracked away in the background.  It is not the band's heavier side , but their more melodic that makes them their own entity. There is a some what sung vocal it's more like a gothic chant 3 minutes in. The guitar playing is much more memorable here. The first time they go after a more feral Watain like sound is on "Into the Storm". It smooths out before hitting the verse. Then jam out toward the end of the song with a section that lets the bass wander.

With talk of rabid hungers devouring everything into nothingness, which might be sentiments I support, seem like ideologies espoused by their influences. The formula seems to be three minutes straightforward metal and then things change up with more atmosphere or melodic variations. Things progressively darker with "the Fire, the Faith, the Void". It's an instrumental interesting enough to keep my attention.  The are back being Swedish meatballs  with "On Poisoned Ground". I like the bass driven intro to "Where Horrors Thrive".  The lower almost whispered vocal floats in for a few moments here and there.  Every little bit helps as the vocals are really the only weak point of the band. They are the reason I will round this one down to an 8.5. Their influences  are still worn on their sleeves, but to a lesser extent as they continue to find themselves. .