Gothober -Looking Back in Anger at Skinny Puppy's "HanDover" 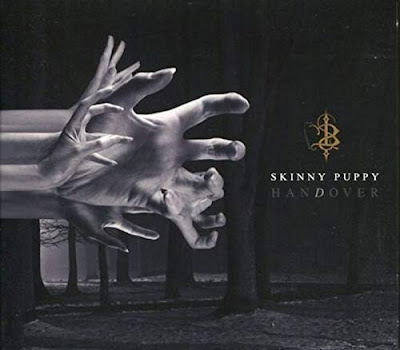 The 11th album from this band was meant to be a noise album that they were handing over to appease a record label. The music business happened and they were allowed to sit on it a little longer and turned it into actual songs, some of the other pieces that were not used were cannibalized on used for Ogre's solo work.  It shows how they were beginning to shift into more edm like back, though guitar can be heard in a sprinkling across the first few songs. "Cullorblind" being the most melodic of these. The vocals are some of Ogre's best. There is a darker vibe as the album progress they touch on the death of their tour manager with the song "Ashas". When tapping into this more personal side of their lyrics it brings with it a fresh sense of honesty.

The glitchy sounds begin to surface on "Gambatte". It'as up beat and melodic with Ogre in a more sing song vocal.  Both more melodic and more aggressive,"Icktums" still cruises along more like a dance song than industrial. "Point" is not as refined and focuses more on the weird beat. It sounds like video game sound effects are fighting in this song. "Brownstone" is weird . It's very British. Like Ogre is reading a story for the BBC.  "Vyrisus" is however slamming and a good example of why Skinny Puppy is in my top 20 favorite bands. There is also a louder thump to " Village". I like the robotic effect to Ogre's voice.

The album ends with "Noisex" which is a fair snap shot of what this album would have been like if they handed it over when they had first planned on it. It just kind of drones on. More of an outerlude. This is an under rated album that gets slept on by most fans but some song certainly worth your time. I will give it a 9.