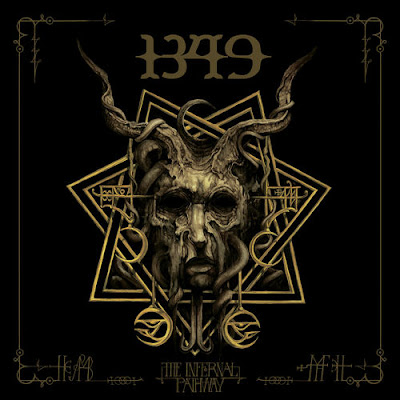 When what they do works it has a palpable evil to it and is like a more feral version of Gorgoroth. 1349 has always bared their  thrash side. This time things are different On my first listen to this album, my though was "Why do they sounds like Carcass?" . Another listen and I could hear the black metal creep through a little more. The first song finds their status as a black metal band less in question. The second and third are both kind of dialed in and not memorable. The drummer is insane and carries the first few songs. The first song that is interesting is "Towers Upon Towers".   "Deeper Still" By Y virtue of it's rabid  blasting is more black metal than the previous song.  The vocals are a little half hearted  and not convincing me of the lyrics. It is energetic. If you just need these guys to play fast, then they are not disappointing you.

"Striding the Chasm" is return to their older sound, though not as inspired . It is however on of this album's better songs. They lyrics cut through the buzz of guitar. I would take less articulation in favor of more screaming. Not even screaming just a nastier tone. Just when you thought this drummer could not get any sicker it happens .  This song does begin to grow on me. They slow down and find a groove with "Dodskamp" . The vocals begin to sound like they have the malice they once did here. Easily the best song on the album. There is a more rock n roll riff that leads into "Stand Tall In Fire"  . A baritone spoken vocals precedes the snarled vocals.  It does break all the way down to the bass line which is a needed dynamic shift as just relentless hammering is not effective.