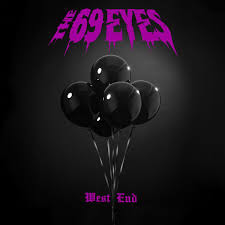 They love goth in Finland. Been sitting on this album for a couple weeks waiting for this month to review it. It opens with a more driving metal feel. It is like Judas Priest meets Sisters of Mercy in places. These guys keep getting better at what they do as this song has a wider dynamic range. When you really pay attention to the singer you can hear where he sounds more like Iggy Pop than Andrew Eldritch. The lyrics are on th silly overtly rock n roll side. It is ok on "27 and Done" . If they stay this silly by the end of the album I am sure it will be to irk me. The album is really well produced. At times they play it too safe and stick a little too close to the formula. Sometimes all they need to do is slightly shift the tension on a song like "Change" and it works.

By the time we get to "Cheyenna" it begins to feel like many of these songs could have been filler from a Billy Idol album. Heavier riff going into "the Last House on the Left". He sings in an even lower voice that breaks him out of the Iggy Pop voice as well as a grittier higher voice that also helps to break things up. The keyboard are a little awkward on this on.the Keyboards  play a larger role that makes more sense on "Death & Desire" , though this song is more like a melodramatic ballad. It is safe to say this is not the album's strongest song. I am sure there is a teenage girl who needs medication somewhere in Finland that loves this. Or a 40 year old women who still thinks like a teenager who does.

They have this real cock rock side that we need to talk about. It is offset by the baritone vocals. This flares up on "the Outsiders". The prophecy is fulfilled here and the dumb lyrics have finally grated on me. The psychedelic edge to "Be Here Now " works much better. Sometimes I do not feel it's the lyrics that bug me as much as the phrasing. I have always found his vocals to be their weak spot and while he has improved over the years it is still my complaint. "Hell Has No Mercy" comes close to being another ballad, but it feels much better than the first one. I will give this one an 8.5, it's an improvement and one of the first albums by these guys I have given more than a couple listens.