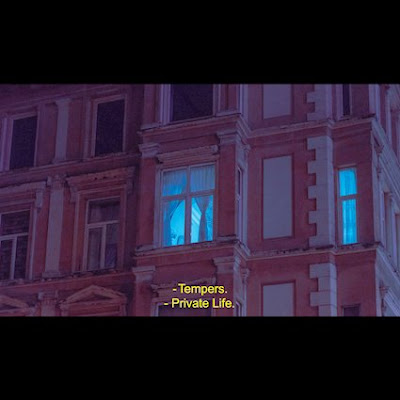 On the more down tempo hipster side of  the darkness comes this duo. The music is more ghostly than the breathy vocals. Low fi synths bounce the lazy melodies along. This their 3rd album so the duo knows where they want to go. They are not taking the typical approach to lo fi dark wave thanks to production choice and not bathing every thing in Bat Cave reverb. This might have cost them a little darkness, but the songs are strong and do not need to hide in the shadows. The stronger electronic pulse of "Leonard Cohen Afterworld". Then things change when she dips down into her lower register for "Peace of Mind". These are the kinds of choices I need from more singers to know they have the range even if they do not use it all the time.  This song does have more of a drone that leans on the vocals. "Filters" is the kind of pop you make when you forget to take your meds .

What I really like is the grittier turn taken on "Daydreams" where it makes me feel trashy and want to prowl night clubs high on coke to have unprotected sex with strangers."Guidance" is a more blatant invocation of the dance floor. Musically it falls safely in the bounds of most dance music from the 2000s . "Push Pull" is a hazy trip hop that sounds like early 2000s Radiohead. The more groove induced side fades into this shoe gazing narcotic haze. The down tempo" More  Than You Realize" is hypnotic enough, yet it drones with little dynamics. Sonically I can draw comparisons with "Mers" era Chelsea Wolfe , though it is haunted by different ghosts. "Sleep" drones along  to an almost  similar path as the previous song. It feels a little more something that would be playing in Twin Peaks. I like the boozy swagger of it's lethargy.

The piece it ends with is just an atmospheric outro. It is three minutes of this , but it is not an actual song. Sometimes this album does get lost in the haze of it's atmosphere , but more often than not they pull it together in drugged out constructions of sound that can afford to write checks the melodies are going to cash. It is some of the sluggish moment that have me rounding this down to an 8.5. Granted that is still in the upper 15 percentile of bands putting things out.