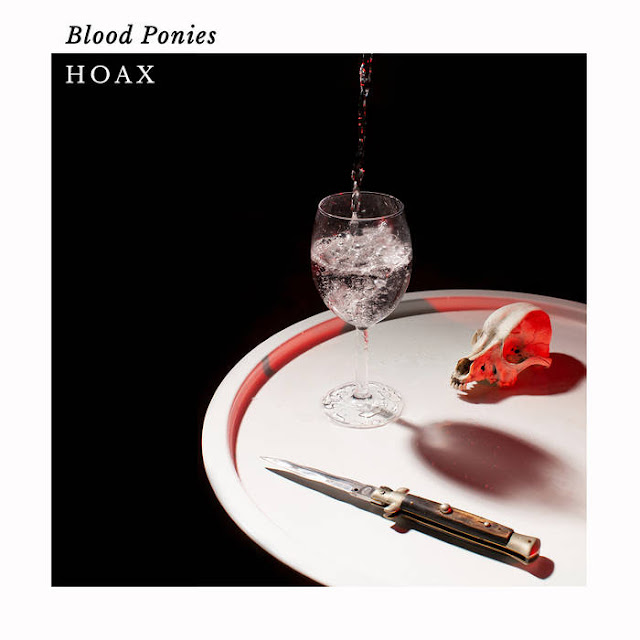 Here is a duo from San Diego who brings something new to the old dark wheel of post -punk. Not relying on the punk in the equation too much but not forgetting it either. The album opens with a low synth like bass frequency. Then comes the looming baritone vocals and single note guitar melody as the drums create a hypnotic pattern . One thing I like about this band more than your average post punk revivalist faction is the vocals more aggressive tendencies. Sometimes these are mixed into the background, others they roar out with more anger than you typically associate with the current state of this genre. I say current as this was not always the case with bands like Killing Joke belting it out with anger, so much so they became the precursor to industrial . They do not stick to one formula and give the album a dynamic range with more of am uptempo punk tension driving "Submit Surrender". This song grew on me with repeat listens .

The only constants to their sound are the drums locking into droning patterns. Their is a more explosive touch to the title track. Their is a catchy croon to the verses of "Four Walls". The chorus gets rowdy almost like an Amp Rep kind of band. The guitar rings out with a shadowy chill, though the song as a whole is more straight forward rock n roll.  "To be hungry already means you want to be free' is an experimental interlude focused on manipulated samples. The closer on the more Joy Division side of things on "Hostile Takeover. That is until the more punk chorus. "The Body" is more brooding but similar in execution. The guitar tone reminds me a little more of Dick Dale. "2182"the pulse of the drums is somewhat similar to patterns we have already heard, so it relies more on the guitar to break things up.

The last song finds them treading firmly while allowing the drums to sit back and wait for the right time to kick back in. This leaves guitar and vocals to bear the weight of the song. The melody gets more interesting the further into the song it goes.I think the fact they do not rest everything on the most conventional sounds and this is darker and heavier than the average post punk band goes a long way with me so I will round this up to a 9.