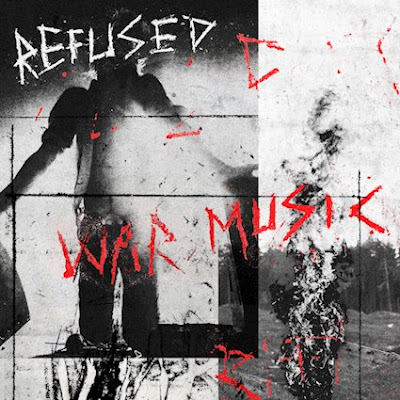 If you do not know who this Swedish post- hard core band is then why did you click on this god damn review? This feels like a much closer return to the band who once showed the shape of punk to come. The opening track is stronger than the more straight forward "Violent  Reaction" . The album before this one had scarce traces of hard core while this ones more firmly rooted in it. I am fine with having melodic hooks in fact I prefer if so " I Wanna Watch the World Burn" works really well for me. "Blood Red " is more aggressive.I guess the weird thing is when they came out they were  ahead of their time now they sound like the status quo they helped established. So much so a song like "Malfire" almost sounds like Papa Roach. Despite this fact it is a pretty cool song.

"Turn the Cross"  is more metallic and aggressive, but this doesn't equate being one of the more inspired songs."Damaged III" has a staccato groove to it, but doesn't feel like it is breaking a great deal of new ground but reaffirms what they already do well. There is more rock n roll to "Death In Vannas".Some of these moments bring Boy Sets Fire to mind. "the Infamous Left" is more straight forward and hard core tinged with darker moments. The breaks downs feel obligatory and not really that much a of a dynamic shift. While it starts off in a much more straight forward punk direction the song ends up in some pretty cool places .

I will give this album a 9, though  it might still need some time to grow on. I think I am most impressed how it is a more aggressive return to their hard core sound. It of course does not touch "Shape of Punk to Come" but how many album really can come in and change the game like that. If you have been on the fence about their more recent efforts I think this album can win you over. This album comes out on October 18th on Spine farm Records.
Posted by Wilcifer at 4:25 PM