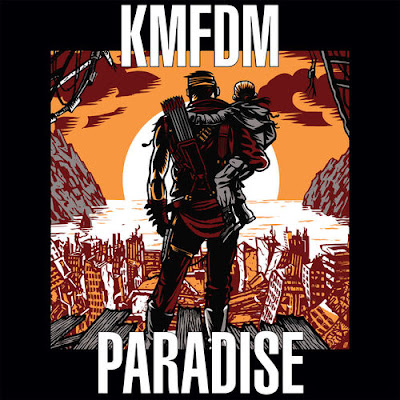 It opens working off a groove and samples with rapped verses . They keep the aggression dialed up with "No Regret". There is more guitar on this album so far. There is less emphasis on the electronics making this more organic and less EDM. Not breaking as much new ground as the opening song, but still pretty solid. Lyrically "Oh MY Goth " is amusing, but it could have been more goth musically. There is a Joy Division like bass line, but aside from that it is pretty much not far from what they normally do.  I like how she shifts her vocals on the chorus. The title track might also be one of the album's best songs. There is a wide range of varied sonic colors . It doesn't feel like they are just playing it safe, though still have enough familiar elements in play. Lucia's vocals are particularly biting and give the song more kick.

"WDYWB" works off of a more electronic pulse. It is also not as dark or aggressive. I am fine with all the above as long as it is not and entire album in this mode. More focused groove "Piggy" is pretty coherent with what KMFDM does. The bass line is wacky and chaotic against the drums. This is a really well produced album. There is a more old school industrial feel to " Disturb the Peace". The groove it evolves into is really cool. Much like the last Ministry album this album is very political, but here is another example of how if the music is good enough I really won't care. There more electronic side to their sound begins to take over on "Automaton" , but give the subject of the song is it understandable. Their are robotic effects on her voice. There are some weird elements to "Binge Boil  & Boil". There is less groove to draw you into it.   "Megalo" kind of calls back to earlier songs. This however still works .

They close out with a weird reggae tone, Not the first song on this album it shows up on . This time it is more pronounced.  The album starts stronger than it ends, but is still consistent enough for me to give it a 9. It is not their best album but is heading in a good direction. If you are a fan it is hard to imagine you will not like this album.