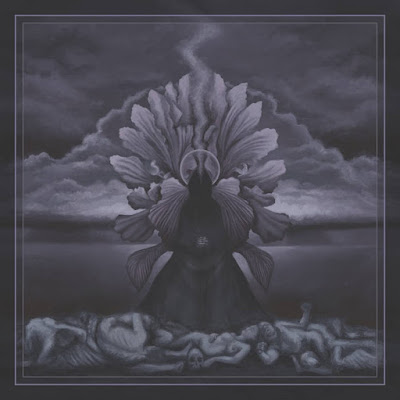 While Anne K O' Neill's dark folk project, might follow a long trend over the past decade of goth sirens, but there is an honest conviction that gives the feeling of earnestness to what she is doing rather than trying to be the next Marissa Nadler or Chelsea Wolfe. It is surprising to see she is from Seattle as there is depth that carries and Old-World European feeling.   The percussion of "Winding " makes the strummed guitar drone more, thus giving this song an almost Death In June feel, despite the female vocals. There is a more brooding storm of atmosphere feel to the "Sonette  an Orpheus". I appreciate how dark it is. There is a hypnotic state it lulls you into, very moody but simple.
"Oy Ty" is more like a folk choral piece. It sounds like witches joining their voices together. There is a more traditional folk feel to "Death" . Vocally her alto here sound more modern in it's approach than singing this around a camp fire . She continues to build sonic layers which justifies this and keeps it from being to minimal . Overall I would say this album is a much more interesting sonic exploration than I would have expected going into this. There is a very experimental vibes in terms of arrangements, which can be heard on the drone of "Mother of Light"  The use of strings on this song is effective in making it darker. The vocal melody in more solemn.
She continues to uses a gloomy brush to pain the songs with on "the Fountainhead of Fire' . It is a sprawling song with many layers of sound emerging as it progresses it feels like a more folk version of Concrete Blonde. At the 7 minute mark I am wondering where they can go for the next four minutes and the answers is to break things down into a more introspective ambiance.  The more booming grandeur that bands like Death in June dip into can be heard on the last song. Overall this is an impressive piece of work, if you are into neo folk this is a must as it is one of the best releases of that kind I have heard so far this year, I will give it a 9.5, The album is being released by Svart Records on May 20th.
Posted by Wilcifer at 3:40 PM