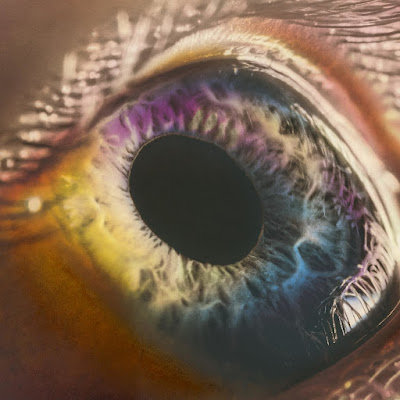 The sixth album from the Canadian indie rockers finds them moving in a darker more introspective direction.  I can understand why the music press of today might be reluctant to embrace this album as this band who has been involved in activism in the past, is not taking a side here, but looking at the world through the harsh lens of its bleak future. The first song covers a great deal of ground to end up grooving like it does. There is a more Bon Iver like sound to the second song. Though it finds its own Dancey groove before it is all said and done, though the drone and dance at the same time.     I think if they go to the well a third time with this formula it will not be as effective.

You can hear John Lennon's influence on "End of the Empire". Interestingly heralding the American empire's end. The second part of this song, which is a separate track, is not as inspired and wanders around on the secondhand smoke of the previous song. The first part of "Lightning" so a more folk turn, so much so that it reminds me of the new Ryan Adams. Granted Adams has headed in a more indie direction with his latest. I can also hear similarities between, the last Killers album along with the War on Drugs here. So it is not their most original moment , but it still works.

"Unconditional" keeps the more folk tinged strum of guitars churning, The second part of this song is the best song on the album. It is more like a Bjorkish take on pop, with Peter Gaberiel even lending his voice to the song. They close the album with the title track. Things go even further in more of a Ryan Adams direction . It almost does not seem like the same band that released "Funeral" with that said I feel like this song is the only misstep that doesn't work. I will give this album an 8.5, as to give it a 9 might lead one to think it is more inspired than it is.