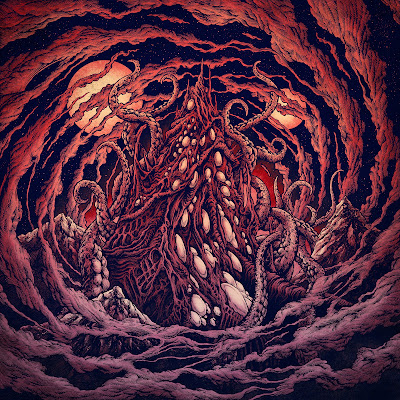 Heading back into their darker heavier roots this French Black Metal projects returns to their sinful ways of summoning ancient evils by opening portals of sound for nameless horrors to slither from. The first track "Chants of the Deep Ones" which is an over Lovecraft reference is as close to a straightforward black metal song as we have gotten from these guys in sometime, and when I refer to it as straight forward or really even black metal, we have to consider who is making this music and how in the past decade they have gotten further and further from convention.  The second song is equally as heavy to less metallic as it draws you into its drugged-out hypnosis of guitar swirling around you. This band has flirted with many styles of music things like shoe gaze and post rock being numbered among them, though they have always gone through the warped worm hole of their creative filter and come as the misshapen monster of whatever sub-genre was cross overed into.
The dissonant creep that lingers in the darkened heart of " Into the Woods" carries the kind of eerie warble that I want from this band.  One of my complaints when it comes to music these days can be when a band places too much focus on getting a certain sound and fails to write a decent song, as the sounds are the colors, the song is the picture you paint. There are always exceptions to this rule. The drumming is the most metallic thing about "Into the Woods" as the terms " the wailing and gnashing of teeth" of hell in the Bible is what the guitars are creating here. There are very few black metal bands that would want to listen to when taking psychedelics these guys are one of the few, I would want to create such a soundtrack.
The growl of the vocals is generally buried in the layers of sounds on this album, they gurgle up from the chaos on "Neptune's Eye".  This song has a stormy but marginally slower throb driving it.  Where most metal lives off of riffs this band has a habit of taking them and throwing them into the abyss to see what comes back. Yes, there are some blast beats employed in this song, but the primordial ooze the blast over makes this feel less like black metal than the songs that preceded this. "Keziah Mason" carries on with the dense buzz of guitar while the drums slow into more of a tangible groove do create a more deliberate drone.  The vocals are sung, but set back into the wall of sound, though mixed with clever blend of effects to sounds as if they are spirits trying to contact this plane. The blast beats take more of a spotlight on the last song, without the band falling into the color by numbers black metal formula.  Four minutes in they allow things to break down into a more wandering ambiance before converging back into an even more raging storm .
6
Posted by Wilcifer at 6:17 AM