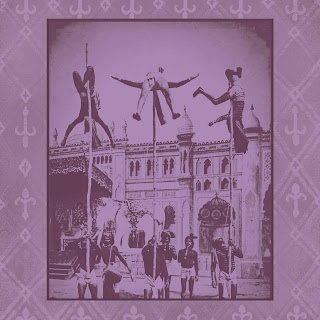 Kyle Tavares from the Canadian sludge band Seer steps away from what most would consider metal to takes a stab at something more along the lines of a shoe gazing 90s grunge. The vocals sit pretty far back into the drums, so while the guitars are up in your face taking up most of the space with the riffage the vocals float under the radar. When you can hear them, they are serving the song for what they should be doing with this sort of thing. This kind of Helmet like rock, was always influenced by metal to begin with so it is more driving and aggressive than other forms of alternative rock from this time period.

The second song finds the guitar having more of a chug. The vocals drift up from the throb a little more, though the mix is very dense and remains in the favor of the guitar. He brought drummer Israel Langlais aboard. Israel certainly gets the job done and does not over play like a metal drummer would, which is where this sort of thing drew the line back in the day.  There are not guitar solos or flourishes of double band, instead it took the thickly distorted fuzz of the guitar and stripped it down to something with a more punk work ethic.  "the Purity" in fact relies to much on the guitar which is driving, but does not ofer as much atmospheric contrast and is a little one dimensional.

The vocals break the surface of the mix, but if I was producing this album, I would have brought them up even further,  Granted singing this sort of thing might not be his strength so I can understand why he would want to hide back in the guitars, but I think he is doing a better job than he gives himself credit for, You can hear where the stoner sludge thing got it's start from this sort of thing back in the day, I will give this album an 8.5 ,as I wish the mix was better than the vocals could be heard more to let these songs shine, but not every one listens to songs for vocals so if you want just a heavy guitar album that only borders on metal and owes a great deal to the 90s these guys have you covered.It comes out July 1st on Hidden Tribe Records.