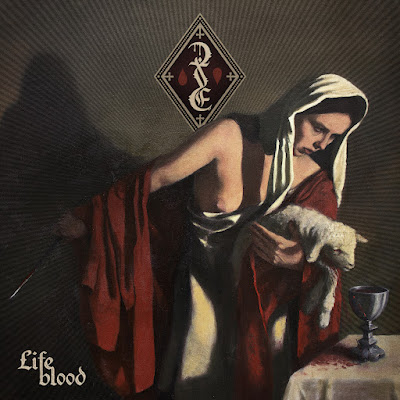 The press release for this album called it morbid rock. My first guess when I clicked on this email was that it would be black metal. I should have gone with my gut. The melodic atmosphere propelling the opening song is chillingly effective. When they get caught up in the blasting assault, they build into it is not as compelling. This Polish band has more in common with Gorgoroth than they do any of their countrymen.  "Smoke and Mirrors" finds the sonic intensity of their sound tightening as it expands. This gives it almost a creepy Dimmu like sound.

The title track is more deliberate. In fact, everything about the song has more room to breathe when they let up on the gas in their speedy hurtle down the highway to hell. The vocals are often multitracked and snarl with a commanding presence, even if they do not hold great range. It is also midway into this song that I hear a riff that might qualify as morbid rock. "Iskry" is more of a straight up blasty black metal banger. Things begin to get dark with "So Bleeds the Night" that finds sonics fittingly dark and dreary for it.

"Sedation to Sedition" took an additional listen or two for the dynamics to sink in. The last song is even more epic with a bigger sound. The range of sonics expands and they summon darkness with seeming conviction. There is a ton of black metal out there so it would be easy for a band to get lost in the shuffle. These guys set themselves apart by adding sonic dimensions to something that is tried and true.  I will give this band a 9 for this album as they manage to be their own sound and created something with sonic weight and darkness.