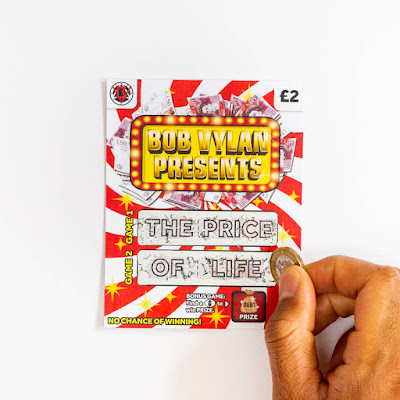 This odd British duo has a great deal in common with Death Grips. The first song is hip hop and they seem to have more to say in that mode than when they are trying to play punk. On "Take That" he just sounds stupid trying to take cracks at Elvis. Dizzy Rascal certainly did it better. That is even with Strange Bones contributing bass. To their credit they do not have a whole team of producers to make this, though it is more lo-fi than that Kendrik Lamar album I just reviewed. "Health is Wealth" is a Red Talk about what you consume.

"He Sold Suns" just kind of breezes by is nothing that grabs you in any way. They are better at the hip hop side of what they do as can be heard on "Must Be More" . When they try to play guitar it sounds amateur, as it sounds like they are picking the most generic punk chords ever to play. The production is more of an issue when they use organic instruments. "Turn off the Radio" is another example of this. The drums sound terrible unless they are programmed. The fuzz that starts off "GDP". Which is one of the album's better songs though it leans more on the hip hop side of what they do, with the lyrics fairly aggressive.

"Bait the Bear" rips off Suicidal Tendencies to the point of riff plagiarism. "Phone Tap" when it comes to punk is more original than the previous song, but that is not saying much when the lack of originality on the previous song was at the point of mind numbing stupidity.  "Drug War" reminds me of when the Beastie boys were kids and they tried to play punk rock . The last song shows how they have not learned from their mistakes and lack self-awareness in regard to what they are good at it. It is not making punk music. Lyrically they are retreading the same ground so they are not great rapper either. Dead Prez does what they try to do in that regard better. I will round this down to a 6 , it is not the worst thing I have heard and there are a few ok songs earlier on in the album they just run out of gas and prove to be a one trick pony midway into it.