Dorothy : " Gifts From the Holy Ghost" 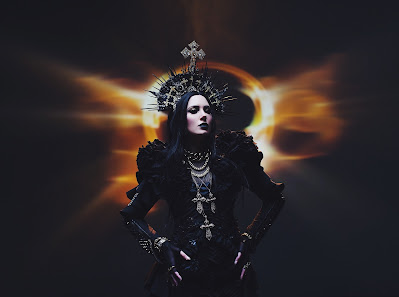 I was at first reluctant to cover this album as the buzz around it was this was some kind of Christian metal. I do not support Christians in any way. That is against everything this blog is about. I did some research and found that she is just in recovery, so all the religious trappings are not based in formal Christianity and lyrically it is just based in metaphor. While she does lay it on thick with the gospel influence and blues swagger. This is poppy hard rock, not far removed from say the Pretty Reckless sonically. The second song is more impressive. It slinks with a sexy shuffle, and she sings about using handcuffs to take the power back, so it is not Sunday school.

"Rest in Peace" doesn't work off the kind of effective groove that drive the first two song, however they are back on that with "Top of the World". There is something not as organic about what goes down here as say the Pretty Reckless. It is very well produced, but perhaps too much so. This can be felt to a greater extent on "Hurricane".  "Close to Me Always" is a pop ballad that has more in common with Pink than your average radio rock band.  Miley Cyrus' more rock turn does come close to what is happening here, though Miley has a more powerhouse voice. However, her pipes so far on this album have been convincing.

"Black Sheep" has a big Halestorm like rock feel to it. The chorus is big, but not the most original thing going.  The lyrics as help reassure you, she is not rocking for Christ. Image-wise she is kind of gothed , out but there is nothing dark about the music which is more just party rock. By the time we get to "Touched By Fire" this album has begun to really cement in my head as something that is what you would get if you combined Miley Cyrus with Halestorm. "Made to Die"  keeps my opinion the same and truth be told the title track only also does in the  doesn't do anything to change this view except it has more of a Buckcherry like attack to it.  I will give this album a 9 even if it is not the most original thing I have heard, since it is a fun grooving listen that is well done.