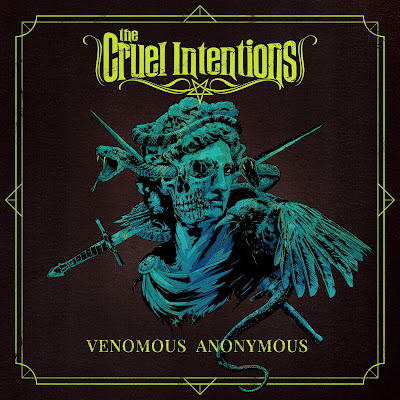 Why the fact Lizzy from the Vains of Jenna went on the form this band go under my radar? Not that I actively seek out a ton of hair metal. I grew up listening to this sort of thing in 80s until I found music that was heavier. Two songs in an I can say I prefer the grittier edge the Vains of Jenna has as this very big and polished in comparison.  Though major chords aside some of this grit is restored on "Sunrise on the Sunset Strip", despite this song being for all practical purposes their version of Katy Perry's "Last Friday Night". On second listen the album opener does grow on me and packs enough punch to be called metal. It is not as dark as the Vains of Jenna. The backing vocals give the title track too much of a Bon Jovi feel. When it came to hair metal, Bon Jovi and Poison were the bands I cared for the least, probably because they were not metal at all. This band works better when they lean more into the Faster Pussycat side of what they do.

For "Casket Case" to tackle the topic of his toxic addiction the mood is more like joyous pop punk. Granted they do not push the pop part of the equation too far.  "Kerosene" has more traditional metal elements in play, though think the Scorpions rather than their edgier British peers. He sings in Swedish on "Salt i Ditt Sar".  It works for this song, which rides the middle of the road in terms of AOR rock of that time. The guitar gets harder on "Final Deathroll", but the vocals seem to still be full of pep despite Lizzy's raspy tenor. There is a Pat Benatar like feel to "Goddamn Monday". I think a few less vocals harmonizing on the chorus might be for the best, but even this version works.

"Bad Vibes" is the first song that feels like filler in comparison to the other songs. They rock out in a way on "Chemical Vacation " that makes up for this. "City of Lice: pretty much circles what they have been doing up to this point, no new ground broken sonically.  I will give this album a 9 as they care about the songs, despite playing it safe in the more radio-oriented direction of this genre, but pull it off really well, as there is no doubt that Lizzy is a great talent.