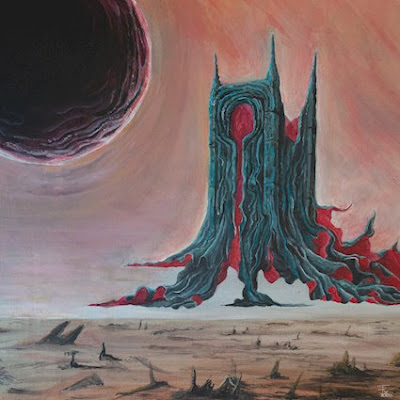 Rather than try to be a one-man band this guy has the sense to recruit players who can bring his vision to life. While this is being marketed as cosmic metal, it's black metal that happens to be more angular and obtuse in the sounds and arrangements. This works more often than not because they do not take the easy way out. His wisdom in bringing on some hefty talent plays in his favor in terms of execution, Colin Marston from Krallice and Gorguts is handling the guitar heroics. The drumming is handled by the drummers from Fleshgod Apocalypse and Sadist, not a huge difference in styling they could interchangeable as there is yet to be a song, where I was like
"Woah the drumming is different on this one".
The modes of playing seem to be tremolo picked guitar or more atmospheric angular passages that are less aggressive. Not a mathy as say Krallice in its attempts to solidify itself as a progressive band, though jarring at times, as otherwise more in line with Cynic, though never as catchy.  "Verminous Barrier' at least manages to keep me engaged when normally when the focus shift to acrobatics I would have been ready to check out. If you are thinking that I must not like progressive music then you might not have read much of what I write as some of my favorite artists are Cynic, Frank Zappa, King Crimson, Mr. Bungle and John Zorn. Ye,s the drumming on "Oceans of Malic" is impressive but it sounds like the guitar is just trying to keep up and the snarl of the vocals is not really contributing that much in terms of songwriting. This album comes out June 17th on I, Voidhanger Records.
The switch into "Total Infection" is the first that did not run together, and things get even more interesting the further you get into the song, which might be the album's best track. There is not a ton of melody to be found on this album. It is also not very dark as the choices for atmosphere provide more spaciousness and breathing room rather than mood.  The last song feels like a more aggressive extension of the previous song. Some of the taunt chugging almost makes you want to bang your head until they add a wanky jazzy solo over it. If the question surrounding this album was are these guys great musicians, the answer would be yes. If you were to ask me if they write songs that are going to stand the test of time, I would be more reluctant to answer. If synths that dominate the second half of the last song, do not make it any easier to answer this question I will give this album an 8, they are good at what they do, what they do could be more effective if they shifted their focus to darkness and melodies.
Posted by Wilcifer at 7:23 PM