Halestorm : " Back From the Dead" 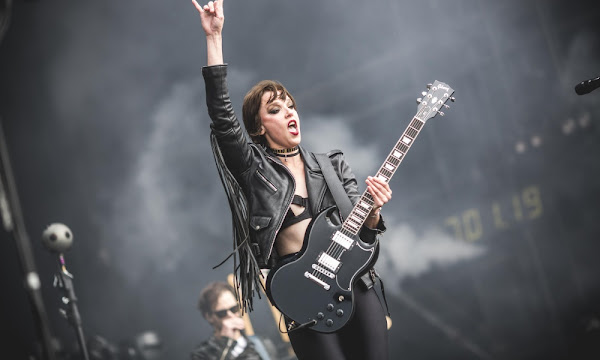 Has anyone though about asking Lizzy Hale to replace Chris Cornell ? I think that could work. She has the pipes at no point in the course of this review will I dispute that fact. What I might call into question is what she does with them as a song writer. The opening track sounds like if a metal core producer had gotten hold of Aerosmith in the mid 70s. The guitar is beefed up and her throaty shriek is in full effect. From a songwriting perspective , I think the Pretty Reckless might have more going on as songs like "Wicked Ways" works off a formula somewhere between Lita Ford and Paramore on steroids. It's like the female equivalent of Finger Death Punch.  I actually prefer them when they give into their pop side on  "Strange Girl".  It was the first song that resonated with me.

"Brightside" splits the difference between Def Leppard and Joan Jett, with sprinkles from Hot Topic as the topping. It's fun and dumb, I was not expecting any deep thinking going into this.  "The Steeple" is lyrically devoid of anything worthwhile, while well song the melodies are manufactured from a beer commercial.  The ballad "Terrible Things" could be on almost any pop album. It does little for me. "My Redemption" could be a pop country artist's attempt to rock the fuck out , the hook reminds me of that for sure. Hale continues to belt it out. Her vocals are the high light the rest of the band is pretty generic.

The good thing about commercial rock bands is none of these songs break the four-minute mark so if I do not like something it is not a lot to endure. I do like the song "Bombshell". Lyrically it's girl power from someone who is a regular on Revolver 's hottest girls in rock issue.  " I Come First" explores similar, I am sure it will be playing at strip clubs everywhere, not as good of a song as the previous one. "Pyscho Crazy: is the anthem for all girls who do not want to be accountable for not dealing with mental health issues.  The last song is a ballad that Miley Cyrus would have done better.  There are maybe a handful of songs I like, but she sings her heart out, think little less cut and paste in the song writing would be best, I will give this a 7.  Has potential , sometimes hit's sometimes , just kind of meh. They are too professional to ever suck, but  rock music is not supposed feel like product and needs more darkness to be convincing