Temple of the Void : " Summoning the Slayer" 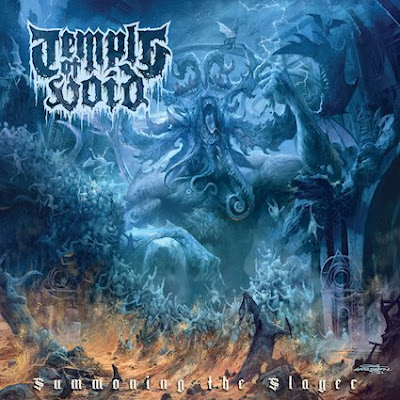 Their 2020 album "the World That Was" landed in my top 5 death metal albums of the year. They have continued to evolve their songwriting past even that point.  Maturation can be felt in how they take both their doom influence and their death metal influence and rather than worry about creating a sound, write great songs. The rule here is cool riffs alone does not a good song make. They not only adhere to this, but pulls some impressive riffs out which at times carry the  kind of teeth that recall classic death metal of the 90s. The more melodic and doomier "Deathtouch" finds the band using a dynamic range of sonic textures in their guitar tones, the vocals are a lower death gurgle, not unlike the kind more commonly used in funereal doom.

"Engulfed" works off a more droning tension that ripples into dissonance. This still allows for dynamics, the overall picture it paints is just not as interesting as what they did on the first two songs. "A Sequence of Rot" uses almost more gothy shades of blackness in how it works off the throb of atmosphere.  Not as head banging in its intent, it still proves itself to be the best song so far as the darkness compensates for the overt metallic attack sacrificed here. The rage back with a more aggressive brand of death metal on "Hex Curse Conjuration" which makes it pretty clear that their biggest death metal influence is Morbid Angel, a fact that is nothing to be ashamed of.

They bring sonic colors to the table that are outside of the metal spectrum but are still rooted in darkness. The song "Transcending Horror" is perhaps one of the best examples of this as they bring a great deal of atmosphere and melody to the table, which still creating impressive death metal that emotes from a place beyond just aggression. There is almost a shoe gazing feel, to the clean guitar that opens the song before the dynamics swell. The growled vocals work really well here because they are being used in a manner more unique when considering the backdrop they are layered over. The cleanly sung ballad that closes the album feels more like an outro ,sure they pull it of in an effective manner , but I am unsure how it fits with the the bigger picture here. Regardless I will round this one up to a 9.5, as they continue to uphold their legacy and crafting interesting heavy music, that proves metallic snarl does not have to be confined to a monochrome aggression.This album comes out June 3rd on Relapse Records.